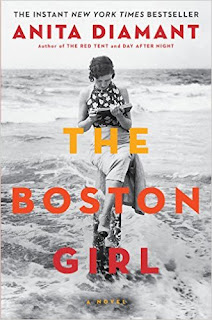 The Boston Girl, by Anita Diamant
Published December 2014 by Scribner


About the book (from Amazon):


New York Times bestseller!
An unforgettable novel about a young Jewish woman growing up in Boston in the early twentieth century, told “with humor and optimism…through the eyes of an irresistible heroine” (People)—from the acclaimed author of The Red Tent.

Anita Diamant’s “vivid, affectionate portrait of American womanhood” (Los Angeles Times), follows the life of one woman, Addie Baum, through a period of dramatic change. Addie is The Boston Girl, the spirited daughter of an immigrant Jewish family, born in 1900 to parents who were unprepared for America and its effect on their three daughters. Growing up in the North End of Boston, then a teeming multicultural neighborhood, Addie’s intelligence and curiosity take her to a world her parents can’t imagine—a world of short skirts, movies, celebrity culture, and new opportunities for women. Addie wants to finish high school and dreams of going to college. She wants a career and to find true love. From the one-room tenement apartment she shared with her parents and two sisters, to the library group for girls she joins at a neighborhood settlement house, to her first, disastrous love affair, to finding the love of her life, eighty-five-year-old Addie recounts her adventures with humor and compassion for the naïve girl she once was.

Written with the same attention to historical detail and emotional resonance that made Diamant’s previous novels bestsellers, The Boston Girl is a moving portrait of one woman’s complicated life in twentieth century America, and a fascinating look at a generation of women finding their places in a changing world. “Diamant brings to life a piece of feminism’s forgotten history” (Good Housekeeping) in this “inspirational…page-turning portrait of immigrant life in the early twentieth century” (Booklist).

My Take
This slim book surprised me in so many ways, not the least of which was how much I enjoyed it! Not my usual choice for beach reading, it was gifted to me as "literature" and the only way it ended up in my beachbag was it didn't weigh very much.  No romance, no sex, no suspense, no paranormal elements. Just a girl coming of age in 1915 Boston. But wow.

Engaging, emotional, enlightening, and totally absorbing, part of me wished it was longer and went into more detail, but another part of me loved it for its sparse brevity in describing heart wrenching scenes from Boston's complicated past history of immigration and women's rights.

The story is told in first person by an 85-year-old grandmother, answering her granddaughter's question about what life was like when she was Young. Born to recently immigrated Hungarian Jewish parents in 1900, the narrator pulls no punches about the life of the poor in turn of the century Boston. No sugar coating or rose-colored glasses, but neither does she whine or bemoan her plight. The author herself is a journalist by profession, and the narrator's story comes across as both a factual and poignant telling of how girls grew up and survived through the century, with most of the focus from 1915 through the depression.

I can't recommend this as a beach book because I kept getting tears in my eyes and steaming up my sunglasses. And worst of all, I was unable to order fresh drinks when the waiter came around with his tray. Yeah, it's an Emotional book.

Then again, I can't say enough good things about the writing and the character development and the thoroughly engrossing story that kept me turning pages for several straight hours ... Thank goodness for beach umbrellas and sunscreen or I would've been burned to a crispy critter!

If you're a fan of historical fiction, interested in the plight of women at the turn of the last century, or want to read about early Boston, grab this book now.

If you like engaging first person coming of age tales, grab this book now.

If you're looking for a good book and have a few hours to spare, grab this book now.

If you have a book club and it's your turn to suggest something, grab this book now.

Basically, I can't say enough good things and loved every minute of it. If there were more than 5 stars, I'd click on them all.

Grab a copy on AMAZON ~ or visit your local library!
Posted by Katie O'Sullivan at 11:06 AM