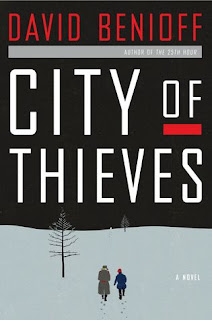 City of Thieves, by David Benioff
Published May 2008 by Viking Adult

During the Nazis’ brutal siege of Leningrad, Lev Beniov is arrested for looting and thrown into the same cell as a handsome deserter named Kolya. Instead of being executed, Lev and Kolya are given a shot at saving their own lives by complying with an outrageous directive: secure a dozen eggs for a powerful Soviet colonel to use in his daughter’s wedding cake. In a city cut off from all supplies and suffering unbelievable deprivation, Lev and Kolya embark on a hunt through the dire lawlessness of Leningrad and behind enemy lines to find the impossible.

By turns insightful and funny, thrilling and terrifying, City of Thieves is a gripping, cinematic World War II adventure and an intimate coming-of-age story with an utterly contemporary feel for how boys become men.

Wow. One of my teens heard about this book from a friend, purchased and read it on his own, and then bugged and badgered and pleaded with me to read it next so we could talk about it and so we could share the experience. Like when one of my other sons came to me with tears in his eyes after finishing the Book Thief, begging me to read it right away.

I love when a book has such a profound affect on a person that they CAN'T WAIT to share it!

This is a book like that. In the beginning I assumed it was a YA book because of the age of the characters and the thinness of the paperback, but it really isn't. The author includes murder, death, starvation, violence, sex, cannibalism, torture, and dirty jokes, as well as other brutal realities of war.

It's a coming-of-age historical fiction set during World War II during the siege of Leningrad. But you could read all that in the blurb. What the blurb doesn't convey is the dirt and grit and brutality of daily life, nor does it fully describe the impossible quest the two main characters embark upon, or the close relationship that develops between the characters.

This is another in the vein of realistic portrayals of the horrible realities of war, and the glimpses of humanity, love and absurdity that peak through the darkness. I loved this book in the way I loved Skeletons at the Feast (1945 Poland) and Sandcastle Girls (World War I Turkey), both by Chris Bohjalian, though this was less lyrical and a lot more raw, but completely engaging nonetheless.

There is nothing sugar coated about this book, but I wouldn't have it any other way. Definitely a 5-star recommended read.

You can grab a copy on AMAZON, but for some reason the Kindle version is more expensive than the paperback, so you'd be better off finding it at your local bookstore. It's not a new release so plan to call ahead.