Writing Wednesday: Cast of Character? Don't Do It!

If you read last week's writing rant, you know I spent two days in a car with my middle child and all his stuff, driving to Chicago to drop him at college. It was a great trip - easy driving, easy conversation switching between anxiety and excitement every hundred miles, for both of us. But he's there now. He's happy and settling in and loving it - so far so good. 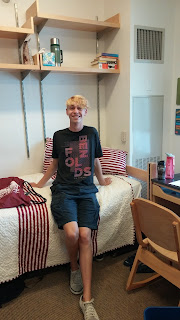 Since we rented a car to drive out there, we were able to fly home... so of course I downloaded several new books to keep me busy. Yeah, I tend to panic at noisy landing gear and screaming babies so absorbing myself in fiction is the way I ignore my fear of flying.

The first book I downloaded opened with a CAST OF CHARACTERS page.

Before the book even started.

And it wasn't a simple cast of characters, as the story was a convoluted tale of a philandering billionaire father - recently deceased - who had multiple daughters by different women throughout his hotel chain, none of whom knew each other. I mean, the blurb sounded kind of good or I wouldn't have downloaded it.

Instead of working to organically introduce us to the various characters, the author took the easy way out and SPELLED IT OUT FOR US BEFORE THE STORY EVEN STARTED.

Instead of SHOWING us who the women were as the story naturally unfolded, she flat out TOLD the reader "Here are all the secret daughters and who their moms were and what their specialties are."

The very first chapter starts the day after the father's funeral, at the reading of the will, from the POV of the oldest legitimate daughter, as in, she and her sister had a mom who actually married this cheating asshole. But her shock when the others were introduced wasn't nearly as effective as it might have been if the CAST OF CHARACTERS hadn't preceded the first chapter.

In addition to that, giving me that list to read and ponder first thing, right up front kind of predispositioned me to despise the now-deceased father, who slept around while his wife was not only still alive but home with a small baby and then had a second daughter with her while he was busy fathering all these other kids around the country. When I got to the second chapter where she reads the letter he left her explaining his actions and reasoning, and she accepted it all ---- well, yeah, I closed the book. Maybe it got better, but I'll never know.

Are you tempted to add a CAST OF CHARACTERS to the prologue of your novel because you think the reader will get confused by the number of characters you're introducing and who they are and how they fit into the scheme of things? DON'T.

Go back and work on rewrites until you can make each of those characters memorable in their own right, with no need to explain beforehand to the reader who they are or why they are important. It's a hell of a lot more work, but it makes for a much stronger story, a better read, and a more satisfying explanation when the reader can unfold each character organically.

And if you can't keep them all straight in the body of the story, maybe you should consider using fewer characters. The only place a reader should see a CAST OF CHARACTERS is when they read a play.

What's your take on using a "Cast List" at the beginning?
Posted by Katie O'Sullivan at 8:19 AM