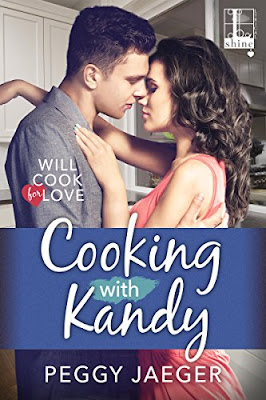 Cooking with Kandy
By Peggy Jaeger
Published 2017 by Kensington Press


Sugar and spice and everything sexy make the perfect recipe for romance in this brand-new series by Peggy Jaeger. Look for exclusive recipes in each book!

Kandy Laine built her wildly popular food empire the old-fashioned way—starting with the basic ingredients of her grandmother’s recipes and flavoring it all with her particular brand of sweet spice. From her cookbooks to her hit TV show, Kandy is a kitchen queen—and suddenly someone is determined to poison her cup. With odd accidents and threatening messages piling up, strong-willed Kandy can’t protest when her team hires someone to keep her safe—but she can’t deny that the man for the job looks delicious. . .

Josh Keane is a private investigator, not a bodyguard. But with one eyeful of Kandy’s ebony curls and dimpled smile, he’s signing on to uncover who’s cooking up trouble for the gorgeous chef. As the attraction between them starts to simmer, it’s not easy to keep his mind on the job, but when the strange distractions turn to true danger, he’ll stop at nothing to keep Kandy safe—and show her that a future together is on the menu. . .

I've been a fan of Peggy's writing for a while now and was so excited to be offered a chance to review an ARC of her latest release in exchange for my honest review. Her characters are always so real and her stories never fail to satisfy. Cooking with Kandy is no exception, and I'm very excited that this will be a series of books.

First let me say, I'm not a fan of this cover art. I don't think it does either of the main characters justice. Reading the story, I imagined them both slightly older. Kandy's hair should be darker, her curves more pronounced. Josh should be rougher, with more planes and angles... and bigger biceps. Much bigger. But on to the actual story and writing.

Kandy Laine is a celebrity chef who's written a few best selling cookbooks and has the top rated cooking show on television. She's the oldest daughter in a tight knit yet slightly dysfunctional family, and takes pride in the fact that her relatives all pull their weight in her food-based empire.

Success breeds envy, though, and someone has been threatening her... so her cousin, who is also her personal assistant and planner and right-hand woman, decides to hire a private investigator to figure out if its simple harassment or something more. Enter Josh Keane, an ex-cop turned PI who takes the bodyguard/investigative position.

Sparks immediately fly between them as the tension quickly ratchets up. The harassment turns from annoying to dangerous and  Josh becomes Kandy's shadow to keep her safe.  Kandy feels the heat in his every look, despite his insistence on keeping his distance. But will he be able to keep his focus on his job and keep her safe?

Told in alternating points of view, the story moves at a satisfying pace, with lots and lots of sensual tension sizzling between the main characters. The cast of characters and multiple red herrings reminded me of some of Jennifer Crusie's romantic suspense novels. Humor, heart, and sizzle wrapped into a puzzle to be solved.

If you like a touch of suspense with your romantic tension, give this novel and this series a try. You will totally be glad you did.