Monday Book Review: Her General in Gray, by Linda Nightengale 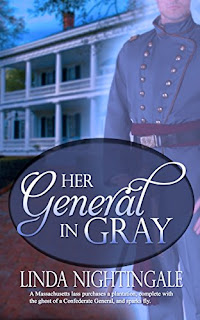 Her General in Gray, by Linda Nightengale
Published April 2017 by The Wild Rose Press


Autumn Hartley purchases Allen Hall at a steal, but the northern lass gets far more than a beautiful plantation in the South Carolina Low Country. The house comes complete with its own ghost, a handsome and charming Civil War General—for the Confederacy. The stage is set for another civil conflict.

John Sibley Allen died in battle from a wound in the back, the bullet fired by the turncoat, Beauregard Dudley. The traitor’s reincarnation is Autumn the Interloper’s first dinner guest. Sib bedevils her date and annoys her with fleeting, phantom touches, certain he can frighten her away as he did previous purchasers. As time marches on, her resident ghost becomes more appealing while her suitor, Beau, pales in comparison. Autumn finds her ability to love didn’t perish in the divorce that sent her south seeking a fresh start.

After over a century in the hereafter, Sib discovers he is falling for none other than the feisty Yankee girl, but what future could a modern woman and an old-fashioned ghost possibly hope for?


My Take:
This short novel jumps right in without much preamble, presenting us with a Yankee heroine confronting the ghost of the Confederate general who haunts her Southern mansion. Just what every new homeowner dreams of, right? Well, maybe, but only if all ghosts could be as handsome and charming as General John Sibley Allen.

Autumn Hartley moved to South Carolina to start over, never considering the ghosts of someone else's past might also come haunting. General Allen was shot in the back by a traitor and his angry spirit is unable to move on. Which doesn't fully explain why he's so drawn to the new owner of his ancestral home. The pair have natural chemistry, and with every passing moment they spend together, their relationship grows stronger, but actually being in love with a ghost from a different time period? An interesting concept to explore in a romance for certain!

This sweet novella is told in alternating points of view, between the General and Autumn, and makes for a fast fun read. I hope the author writes more with these characters because I'd totally love to see where this romance leads.

If you like ghostly romances, check this one out. Grab a copy on AMAZON
Posted by Katie O'Sullivan at 5:00 AM