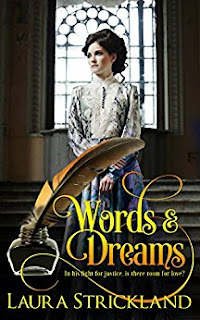 Words and Dreams, by Laura Strickland
Published April 2017 by The Wild Rose Press


Dorothea Sinclair has left her small home town in Maine and come to Boston to begin a career as a newspaper reporter. But so far her job on the Guardian has proved disappointing. More skivvy than reporter, she’s even been subjected to a humiliating proposition from the chief editor’s son. She needs a break but never expects it might come from a chance meeting with an Irish ruffian.

There’s a great deal of injustice in Boston, and O’Hare, embroiled in his fight for equality on behalf of Boston’s Irish, is well aware of it. When he rescues Dorothea’s hat on the waterfront, he’s surprised to learn she’s a reporter. And when she offers him the opportunity to state his case in the Guardian, what can he do but accept? It’s the perfect chance to put his dreams into his own words—and the only sure way to see her again.

This historical romance is set in Boston in 1871, a time of upheaval and unrest among the classes. Irish immigrants were clamoring for equal pay and equal rights,  at the same time that women all over the country were asking for the same.

Dorothea Sinclair left her hometown in Maine to pursue a career in journalism at a Boston newspaper. When she arrived at her new job, she found herself delivering tea and warding off advances from her boss's son instead of reporting news. Finally at the end of her rope, a tall dark stranger helps her pull it back together and gives her fresh purpose.

Hare O'Hare -- which of course isn't his real name, but that's not important right now -- was born in the United States, but his mother was a poor Irish immigrant and he relates with the immigrant plight. A tradesman by day, he also helps organize the dock workers who seek equal pay and fair treatment. With Somewhat of a Robin Hood-type legend, O'Hare gets a lot of blame and bad press.

Dorothea sees an opportunity for him to tell his side of the story, and in the process make a name for herself as a reporter. But not everyone in Boston is happy with either of those outcomes, and there are forces determined to keep both the Irish and women in their proper places as second class citizens.

Words and Dreams is an interesting, well-written read, and kept me turning pages and rooting for both justice and a happily ever after. The glimpses of the everyday work life from two hundred years ago were truly fascinating, as so many historical novels are set in the lives of upper-class heroines with social --but not necessarily societal -- woes.

This is a sweet romance, with barely a kiss let alone any sizzle, but an engrossing read nonetheless. If you like your historic romance with more history than heat, give Words and Dreams a try. Trust me. You won't be sorry!