Friday Feature: Working on the BLURB for Deception 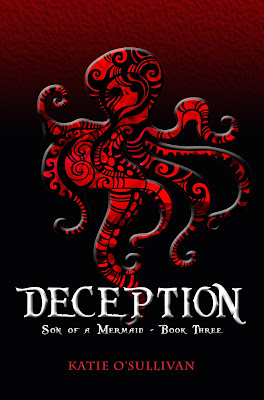 I'm working on the back-of-book blurb, as well as the Library of Congress descriptions for my upcoming installment to the Son of a Mermaid series. Any comments and critiques are more than welcome. Leave in the comments or email me directly - and thanks in advance for your input!!!


For Shea MacNamara, life under the sea has never been more complicated.

Months after being captured, Prince Demyan remains on trial for his crimes while continued unrest stirs among the clans. Tensions mount between Shea and his friends as they unravel lies that bring identities – and loyalties – into question.

The deceptions of both the past and present have implications for everyone’s future. And at the root of everything… the magick that binds the undersea world together.


Shea MacNamara’s first semester at the University of Atlantis kicks off with Prince Demyan’s trial. When an imprisoned Zan confesses that Shea’s father wasn’t killed by the tornado that destroyed the farm, the trio leave Atlantis to search for him. In the process, they uncover a conspiracy between Demyan and the magistrates of Atlantis to dethrone all the royals and take control of the undersea world.

Email ThisBlogThis!Share to TwitterShare to FacebookShare to Pinterest
Labels: #amwriting, Deception, Son of a Mermaid series