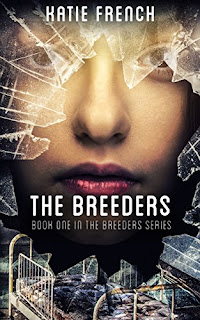 
Do you miss The Hunger Games? Unable to find a book that will keep you turning pages long into the night?
100,000 copies sold. 400 four and five-star reviews. Kindle Book Awards 2014 Semi-finalist. Multiple category Amazon Best Seller. You've found your next obsession.

Riley is one of the world's last free girls. When Riley was born, her mother escaped the Breeders, the group of doctors using cruel experiments to bolster the dwindling human race. Her parents do everything possible to keep her from their clutches-moving from one desolate farm after another. But, the Breeders control everything.

And they're hunting Riley.

When the local Sheriff abducts the adult members of her family, Riley and her brother Ethan are left to starve. Then Clay arrives, the handsome gunslinger who seems determined to make up for past sins. But Clay can't know she's a girl, or he might sell her to the very people she's trying to avoid. As Riley's affection for Clay grows she wonders can she trust him with her secret? She's worth a lifetime's wages. How could anyone, even someone she's growing to love, give up an opportunity like that?

For fans of The Hunger Games, Divergent, and The Gender Game, The Breeders is a book that will have you turning pages long past your bedtime. Pick up your copy today.

My Take:
Dystopian sounded like a good idea for Halloween month, and both the write-up and reviews of this book made it seem right up my alley. I loved The Hunger Games series, and enjoy YA dystopian - - but the hyperbole of the build-up may have oversold this story, making me expect more.

Yes, it's a compelling read. And it has lots of the elements I appreciate in this sort of book. But the whole thing left me feeling... meh. There are five books and three novellas in this series so far, but at least this first one has an ending that can stand alone. It also has over 500 Amazon reviews, half of which are 5-stars, so readers seem to like it.

The story is set in some post-apocolyptic future, after some sort of event that leaves most of the remaining female population sterile. The reader isn't sure how far into the future we are, or how long ago the event occurred. There are remnants of a life the reader can recognize, but things seemed mixed together, but I'm not sure whether that's on purpose or because the author didn't have a clear picture of the timeline herself. The story is well written and interesting on many levels, but confusing on others.

Our heroine Riley lives on a remote farm with her family, hiding from "the Breeders," the program that confiscates all women of the right age to help repopulate the planet through experimentation that's never completely fleshed out. For all that she understands about her world, she's also highly impulsive and seems eager to take risks, not considering the consequences to herself or others. I guess she's supposed to be like Katniss Everdeen in that regard, but Katniss had more inner strength and purpose, where it's not clear that Riley does. It's also not clear whether Riley actually grows at all from her experiences, or from dragging everyone else through her misadventures.

Our hero Clay starts the story as a bad guy trying to overcome his inner demons and salve his own guilt by being nice to Riley and her brother. His journey to redemption takes the entire length of the book, with Riley alternately trusting and fearing him. At least the author has a much more clear conception of his character, demons and inner drive than she does for Riley.  And by the end, he grows into a guy you can totally root for.

If you love dystopian YA, this might be a good series for you, as it's well-written and action packed. If you hate it when characters make bad decisions over and over (without seeming to learn one damn thing) then maybe this isn't your type of read. Light and fast-paced, it made a rainy afternoon pass pretty quickly, but I'm not rushing to purchase the next in the series.

Try it for yourself - available on AMAZON.