Monday Book Review: At Last in Laguna, by Claire Marti 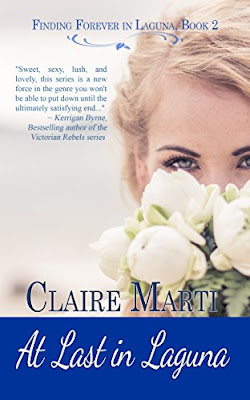 At Last in Laguna, (Finding Forever in Laguna, Book 2) by Claire Marti
Published October 2017 by The Wild Rose Press

Alyssa Morgan has secretly been in love with her older brother Nick’s best friend, Brandt Dempsey, since she was an awkward, lonely teenager. When she catches the bouquet at Nick’s wedding, she throws caution to the wind and propositions Brandt to a two-week fling. He’s tried to ignore how Alyssa has blossomed into a strong, talented, gorgeous woman because as his best friend’s baby sister, she’s off limits.

After they share a mind-blowing kiss, Brandt struggles to fight their undeniable chemistry. His tragic childhood scarred him, but he pushes it deep inside, only allowing the world to see a wealthy, carefree entrepreneur. Forced to work together on Brandt’s latest charitable venture, Brandt and Alyssa’s passion cannot be denied. Alyssa knows he’s the one. Can she convince him they belong together?

Claire Marti crafts a heartfelt story filled with both longing and self-doubt. The self-imposed barriers keeping these characters from their happily-ever-after are both real and really frustrating, as each struggles to work through their inner demons and find a place of acceptance.

At Last in Laguna is the second book in this sexy contemporary romance series, but can easily stand alone. Both the hero and heroine had supporting roles in the first book, but their story does not depend on the first for context.

Alyssa Morgan is the younger sister of the hero in book one, Second Chance in Laguna.  And yes, she's totally in love with her brother's best friend who thinks of her as the off-limits little sister.

Brandt Dempsey might have considered Alyssa "little sister" material, but ever since a certain Kiss under the Mistletoe, she's been co-starring in all of his hottest fantasies. Except he still thinks of her as a golden girl on a pedestal... so when she propositions him in the first chapter, he's completely caught off-guard.

The third-person narrative progresses in a he said/she said manner. His hardscrabble childhood makes him feel totally unworthy of the attentions of someone like Alyssa, while her struggles with self-worth and eating disorders make her feel unworthy of love, period. The continued battling with inner demons and doubts are enough to make a reader scream "enough" and slap them both silly... Or maybe that's just me.

The sex scenes are panty-melting hot, and the emotions tug hard at your heart strings, so just hold on through all the angst-y self-doubt. Ms. Marti pulls it all together by the end of the story and gives the characters the HEA they both deserve. I'm totally looking forward to the next installment of this series.

Grab your copy on Amazon.