Friday Feature: An Excerpt from DECEPTION, Son of a Mermaid Book 3 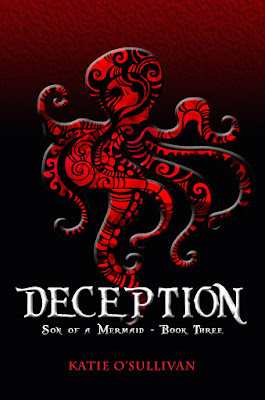 Kae watched Shea leave, a sinking feeling in her stomach. Too late, she realized Chip was moving closer to her again, sliding a hand around her waist, his bare chest pressed against her arm. “I’m sorry about your breakup. I’m always here if you need a shoulder to cry on, or someone to listen.”
She narrowed her eyes. “What makes you think he broke up with me?”
Chip took half a step back. “C’mon, I saw the way you looked at him, like he was a double dip of chocolate ice cream with sprinkles on top. You still like him.”
She couldn’t deny that, especially if it was so obvious. “Well, sometimes things don’t work out the way you want them to.”
“And on that note…” Hailey grabbed Kae by the wrist and dragged her out of the kitchen. “We’re going to bed. See you guys for breakfast.”
Kae stumbled along after Hailey, trying to keep her voice to a whisper in spite of how upset she was at the situation, both at Shea leaving her behind and at Chip’s over-the-top flirting. “Your brother…”
“…is a pig,” Hailey finished the sentence for her. “Although, I’m not sure what the equivalent sea creature would be in this instance.”
“I’m not sure what a pig might be, but it doesn’t sound good. I was going to say sea slime.” Kae’s anger evaporated into laughter as Hailey burst into an infectious round of giggles.
“A pig is a farm animal who likes to live in its own filth, and the comparison is definitely meant as an insult.” Hailey shut the bedroom door firmly behind them. “Don’t worry, though, he wouldn’t dare come in here and bother you. I’m sorry I mentioned the break-up.”
“Me too.”
“But you have to share with me. Why did you and Shea split? Really?”
Kae hesitated. “I’m not sure how much you understand about our undersea culture.”
“Not much,” Hailey admitted. “Only the bits and pieces Shea shared with me when we were still back on Cape Cod.”
“You know he’s a prince, right?”
Hailey grinned. “Yes, but isn’t every mermaid and merman some kind of royal prince or princess or something of the sort? They always seem to be in the fairytales.”
“Life isn’t a fairytale. And no, since mermaids generally only give birth to one child, there aren’t a lot of royal heirs swimming around.”
“One baby? No brothers and sisters? Wait, didn’t Shea say his grandfather has a sister?”
“Mermaids only have one baby. I said nothing about how many wives a merman can take in order to have a son. There are many more mermaids in the oceans than there are mermen.”
“Oh wow.” Hailey plopped down on her bed and patted the space next to her. Kae hesitated for a moment, but then joined her. “Okay, so I understand the one baby thing, I guess… but still. What does it have to do with you and Shea? I mean, you guys were only dating, not talking about getting married or anything.”
“True.” Kae let out a heavy sigh. “And if he was anyone else, maybe it wouldn’t matter. But he’s the prince of the Atlantic, and the future king of my clan. I’m a servant in the royal household and someday…” Her words trailed off.
“You mean since your mom works for the Queen, one day you’ll work for the next queen? Meaning whomever Shea marries will end up being your boss or whatever.” Hailey’s jaw fell open. “Oh. My. God. Yeah, I can see how things could get extremely awkward.”
Kae tried to smile. “I thought it might be easier to break up rather than let our relationship keep going.”
“And is it?”
“What?”
“Easier?” Hailey patted Kae’s arm, her face serious. “I saw how you look at him. And I totally feel how jealous Shea is of your friendship with Zan.  He totally thinks you broke up with him over the hunky bad boy sorcerer.”


Kae broke into a grin at the description. “Hunky bad boy? I think someone may have feelings for a certain dark haired merman, but it certainly isn’t me.” It pleased her to see the blush spread across Hailey’s face, validating her statement.
“Well? Answer my question already. Do you and Zan have a thing going on?”
It was Kae’s turn to smile and pat Hailey’s arm. “He’s all yours.”