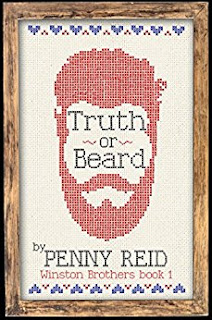 
Beards, brothers, and bikers! Oh my!

Identical twins Beau and Duane Winston might share the same devastatingly handsome face, but where Beau is outgoing and sociable, Duane is broody and reserved. This is why perpetually level-headed Jessica James has been in naïve and unhealthy infatuation with Beau Winston for most of her life. Whereas Duane and Jessica have always been adversaries. She can't stand him, and she's pretty sure he can't stand the sight of her...

But after a case of mistaken identity, Jessica finds herself in a massive confusion kerfuffle. Jessica James has spent her whole life paralyzed by the fantasy of Beau and her assumptions of Duane's disdain; therefore she's unprepared for the reality that is Duane's insatiable interest, as well as his hot hands and hot mouth and hotter looks.

When Jessica finds herself drawn to the man who was always her adversary, how much of her level-head heart is she willing to risk?

Truth or Beard is book #1 in the Winston Brother's series. Each book is a standalone, full length (110k words), contemporary romantic comedy novel, and follows the romantic exploits and adventures of one of the six Winston Brothers.

What fun! I'm not really a "beard" kinda gal, but Penny Reid's sassy writing made me rethink a whole lot of my previous assumptions. Fast-paced, action-packed and filled with heart, humor and a good dose of snark, I was sucked right into this beautiful Tennessee landscape and settled in for the long haul.

Jessica is a hot mess of contradictions, in a good way. She's a planner and a calculus teacher, back in her small town working at her old high school to pay off her student debt. Sensible, smart, and solid. And yet she makes no secret of her plans to travel the world and see it all.

When we meet her in the first chapter, she's headed to a community center Halloween party as a "sexy Gandalf" with full beard and thigh grazing shift, having modified her costume after school hours were over. She ends up in a dark corner making out with the guy she's had a crush on for years. Except.. it turns out it's not him, it's his identical twin whom she holds in utter disdain. Or thought she did. Turns out, not so much.

As it turns out, even though Jessica thought she had a crush on Beau, it's Duane who she's been paying attention to and cataloging for... well, all her life. She knows how he likes his coffee and how he got the scar over his eyebrow... all the little things you notice about someone. And the heat she feels every time he looks at her has little to do with being annoyed by him and a whole lot to do with the electricity bouncing between them that explodes off the page when they kiss.

Duane Winston - Oh, I don't like the name, but I loved the complicated, intuitive, thoughtful man. He's had a thing for Jessica James for years. Years. Long enough to build up all kinds of unrealistic expectations and fantasies of white picket fences and happily ever afters. Turns out he and Jessica share that planning and dreaming trait - but have opposite (and role reversed, in the romance universe) plans and dreams.

Throw in a bunch of small town twists, a local motorcycle club, and Jessica's ornery older brother who takes his police badge a little too seriously, and you've got one fun romp of a story that keeps the pages turning despite whining kids and piles of laundry. Or maybe that's just my house. Either way, Reid is a talented author who knows her way around both character development and action packed plots. This is the second book of hers I've read (totally recommend Neanderthal seeks Human, published 2013) and I may have to use those Amazon gift cards I got for Christmas to order up a few more. 5 stars of fun and sizzle.