Friday Feature: Valentine Reads to Get you in the Holiday Spirit! 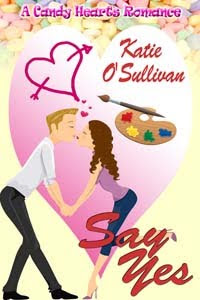 Valentine's Day is a month away, so finally the stocked shelves at the supermarket seem less out of place than they did, say, back in December. One holiday at a time, people. Please.

There aren't a whole lot of Valentine-themed romance novels, but The Wild Rose Press put out a Candy Hearts series a few years ago with 40 Valentine themed stories stretching across every romance sub-genre, from second-chance love to paranormal romance to erotica... something for everyone. Each book is based on a saying from one of those Candy Hearts you can only find around the holiday.

My story in the series is SAY YES, set on Cape Cod during a very snowy February between two people who've both given up on the idea of love. And yet...


Darby Malone has trouble saying no. Hosting a children’s Valentine party at her recently renovated gallery is the last straw, and the last time she intends to say yes to anything. That is, until she meets Ben, a well-known Cape Cod artist with eyes as deep and blue as the ocean. He stirs feelings in her that have been dormant for too long. Can she afford to say yes to him?

Ben Phillips needs this gallery show. His life has been empty since his wife died four years ago, his paintings the only thing giving him solace. But his style has changed, his art completely different than the breezy shore paintings he staked his reputation on. Can he convince Darby to give him a chance – and to consider him for more than just a place on her gallery walls? Will she give him a place in her heart as well?

Here's a fairly long excerpt from the story - to read it all, grab a copy on Amazon for $1.99.

She let out a sigh, tipping her chin up at him. “You know, Ben Phillips, for an artist, you’re actually a nice guy. And you have one of the sexiest smiles I’ve ever seen.” Bright spots of pink appeared on her cheeks as she laughed at herself. “There I go again, unable to filter that brain-to-mouth connection. I’d blame the scorpion bowl, but it’s really just me.”

She looks like an angel. My own little snow angel.

He cleared his throat, trying to get a handle on the turmoil churning within, hoping she felt at least a fraction of what he experienced. His voice came out rougher than he expected, full of emotion. “Darby, I…”

The grimace on her face told him the answer. “Not thinking is what gets me into trouble. Every time.”

Posted by Katie O'Sullivan at 8:54 AM