Monday Book Review: One Night with Hemsworth, by Eden Finley 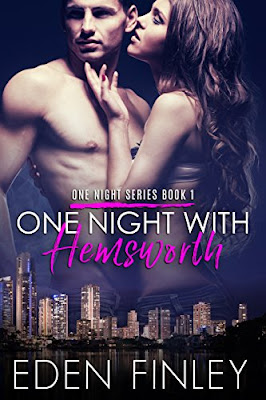 One Night with Hemsworth, One Night Series, Book 1, by Eden Finley
Published 2016


Cole Turner’s ex-wife is getting remarried. No amount of alcohol can drown that out, but taking home the hot brunette at the bar is a good enough distraction. That’s all Paige is meant to be—a distraction.

Paige Minor is too busy studying for her law degree and getting over a bad breakup to care about finding another boyfriend. All she wants is one night of careless fun with a complete stranger. Cole seems like the perfect candidate.

When Cole goes to pick up his son from his ex’s perfect house, with her perfect fiancé, and perfect new life, the last person he expects to see is Paige. She definitely shouldn’t be the one opening the door. Cole and Paige's lives are more intertwined than either could imagine, and now they're off-limits.

This was a New Adult romance that pushed a lot of buttons, and left me wondering if I liked it or not. There was a lot to like about it, but at the same time... I'm still not sure. Written in a he said/she said first person narrative way, we get both sides of the coin and can see how neither of them can think about the situation quite clearly because they're seriously smitten with each other. That's the only part that makes it less creepy.

Now I've got your attention, I'm sure.

Cole is a semi-reformed alcoholic, divorced with a young kid. His ex is getting remarried and Cole is (understandably) upset that his son will be calling another man "dad" in the near future.

Paige is a college student who not only just went through an awful breakup, but has to contend with her father's new fiance moving into their home with her four-year-old son. The little kid seems fine, it's actually the fiance herself that Paige doesn't really like, but she puts up with her since she's making her father happy.

When the pair meet for the first time in a bar, Cole has slipped off the wagon and Paige is on a mission to have a one-night stand. He's older than she is, but who's counting? It's one night of sex, right?

Except Paige's dad's new fiance, her soon to be step-mom, is Cole's ex-wife... and Paige's soon to be new brother is Cole's son.

There's a lot of eww in that sentence.

Somehow the author makes it work, or at least kept me reading, wondering how she was going to have these characters redeem the choices they've made, and continue to make. The "I'm so in love I can't think straight" only goes so far.

Which brings me to the question that kept rattling around in my head as I read this - does this stuff really happen in real life? I thought these situations were manufactured exclusively for Jerry Springer and his ilk. Or did this author just sit down with her friends and a bottle of tequila and say, "Okay, what's the most out-there situation complication I can throw at a romance-novel relationship?"

Because damn. This is up there.

The fact that the author compared her character (in the title and a few times in the story) to Chris Hemsworth may be the biggest part of why I kept reading. (I'm a sucker for that guy's smile.) (yeah, that's it. just his smile. And his accent. I like that too.) Add to that the book was well-written and didn't step on any of my pet peeve nerves (no head hopping, no dialogue cliches, no gay best friend monologuing the backstory...) and it was an entertaining read for a rainy afternoon when I just didn't feel well enough to get off the couch. Or, apparently, search for a different book.

So if you're intrigued after all that, I've included the link to the book's Amazon page. There are other more positive reviews there - but I'm just being honest with you. And honestly, I'm still conflicted about it all.

Check it out on Amazon HERE.