Friday Feature: What to Give a Mermaid for the Holiday? #HolidayBooks 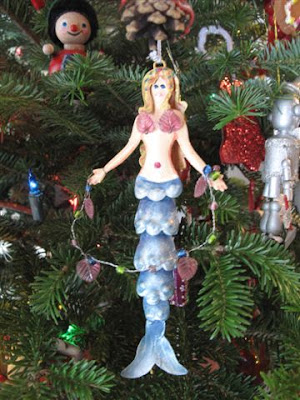 Today may be "Black Friday" for retailers, but I'm spending the day at home baking with my college student before he heads back to campus tomorrow. Sounds like more fun than battling the crowds at the mall, doesn't it?

If you're looking for online gift ideas, might I suggest books? Perhaps a series of mermaid books for that hard-to-buy-for kid in your life? If they like adventure and light paranormal tales like the Percy Jackson series, they'll love my Son of a Mermaid books.

And if you're wondering what to get for the actual mermaid in your life, here's an excerpt from the second book in the series, DEFIANCE, where Shea tries to give Kae a present...


~ * ~ * ~ * ~
Excerpt from DEFIANCE:
“I got something for you.” He dug into his pocket and pulled out a small box, carefully wrapped in shiny blue paper with raffia string. “I saw it in Hyannis the other day when I was walking on Main Street with John and Hailey. I thought of you.”
Kae stared at the package in Shea’s hand, but didn’t reach for the gift. “Oh, it’s pretty. And so shiny blue! Like the ocean’s surface on a sunny day. But Shea, I don’t think paper will last very long underwater.”
Shea’s face cracked into a wide grin. “That’s just the wrapping, silly.” He placed the box in her hand. “You need to look inside for the gift.”
“I’ve never heard of wrapping paper,” Kae turned the box slowly around in her hands, the shine of the paper reflecting the light. “It’s so pretty.”
“You’re supposed to rip it off,” Shea explained, shaking his head. Sometimes he forgot that they came from such different worlds. He showed her how to slide the bow off, and then tore the edge of the paper to get her started.
It was a small package, and the paper came off fairly quickly once she started to rip it. She stared at the white box. “Oh, it’s lovely. But Shea, cardboard is not much better than paper…”
He interrupted. “The box isn’t the present.”
She looked up at him, cocking her head to the side. “Then why did you give it to me? Why give me shiny paper to rip and a box that isn’t a present? I don’t understand.”
He shifted his weight uncomfortably, feeling slightly foolish. “I don’t know. It’s how we give gifts.” He smiled again. “Just open the box already.”
Inside was a cuff bracelet of hammered silver, made of five thin distinct strands that rippled across like waves, looking like the undulating surface of the ocean. Kae stared, not saying anything.
“I saw it and thought of you, leaving on your journey,” Shea stammered, unsure how to gauge her reaction. “You know, the five lines of silver flowing like water, like the five oceans…” His voice trailed off. “You don’t like it?”
“It’s beautiful,” she whispered, her eyes looking watery.
“It’s just a bracelet.” He reached over to take it out of the box. “Let’s see if it fits okay.” He slipped the cuff over her wrist and gently squeezed so that it closed snugly against her skin. He trailed his fingers up to her elbow and leaned his forehead against hers. “It’s so you don’t forget me while we’re apart.”
“Oh, Shea…” Her voice was still a mere whisper. “I won’t forget you.”
~ *~ * ~ * ~