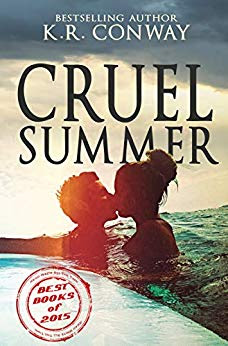 
At the height of summer, Cape Cod is thick with tourists, though some are more murderous than others. Kian O’Reilly is one such visitor to the Cape. His penchant for robbing the souls of irritating beachgoers is second only to his love affair with fine cars (or rather stealing them and killing their owners). But when he ends up stranded on Cape Cod with a rare car and a dead dude in the trunk, he thinks his luck couldn’t get any worse. That is, until Ana Lane shows up.

Gifted as a mechanic and surfer, feisty Ana is not a fan of the entitled Frat Boys who show up every summer, messing with local girls. Believing Kian is nothing more than a typical rich brat, she fixes his car and ruthlessly dismantles his cocky ego, which intrigues the dangerous Soul Thief.

Before long, Kian finds himself falling for Ana and rediscovering the young human man he once was in the process. But when the painful truth behind the real Ana Lane comes to light, Kian may go back to his killer ways to save the one girl he truly loves from the very human monster she lives with . . .

All I can say is Wow, and in a really good way. This book is fast-paced and uber-absorbing, dragging you down into its depths just like the story's Soul Thieves who drag the tourists down under the rip tides. Once I started reading, I couldn't put this down. And yes. Dinner might have burned a little. But it was worth it.

First off, I should point out that K.R. Conway is the author of the Undertow series, a lengthy upper-YA collection that rivals Cassandra Clair's first Mortal Instruments series in depth of story, breadth of characters, and uniquely inspired paranormal world building. Conway writes superb urban fantasy, with just enough real teen angst mixed into the stories to make them really-real and totally believable, even as the supernatural creatures are roaming the streets of Cape Cod.

This upper-YA novel is a stand-alone, set in the Undertow world and featuring two of the characters from the series, in a sort of behind the scenes look at how the pair first met. Told in alternating POVs between the two main characters, we get both perspectives of what went down that fateful summer.

Ana is the ultimate tom-boy bad ass, who works as a mechanic, is a kickass surfer and has a guy as her best friend. Under that tough exterior, though, she's dealing with an abusive and alcoholic father, who she has trouble walking away from, even though he hurts her physically. Kian is a hot hunk of a bad boy, as well as a paranormal creature - a Soul Thief with a obsession for fast cars, who doesn't mind killing the rich owners to get them. Their cute/meet is not really that cute - but the chemistry and tension between them is palpable and delicious to read. Conway does a wonderful job of giving us distinct voices for each character, and each has such conflict at the attraction they feel for the other.

Conway writes in an easy, lyrical style that flows like an insistent current, tugging you along at breakneck speed. I loved every minute of this rollercoaster of a beach read and totally recommend you grab a copy to devour as soon as possible! Whether or not you've read the rest of series - or ever intend to - this stand alone book is well worth your reading time.