Monday Book Review: Their No Strings Affair, by Charlotte O'Shay 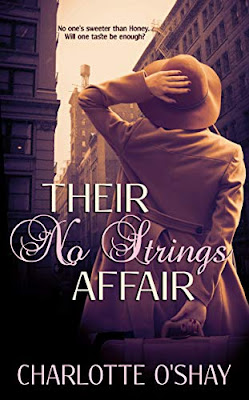 Their No Strings Affair (City of Dreams, Book 3), by Charlotte O'Shay
Published June 2019 by The Wild Rose Press

Okay, right up front I'm just going to say it. I don't like the cover. It's too brown, and makes it look like a period story from the 1930s or 40s. I also don't like the blurb (which I already mentioned to the author. If I hadn't loved the first two books so much (so much) I wouldn't have given this story a second glance.

But I loved the first two stories. And I love the way this author writes, with emotions that bleed off the pages, so I did give the story a chance. And once I got going, I couldn't put it down.

Honey's a complicated character, which Ms. O'Shay excels at creating. She's brash and sassy but also vulnerable, smart but gullible, streetwise and naive at the same time. At "five feet nothing" she's a bundle of kinetic energy moving at breakneck speed until she runs into Jake Ricco. Ex-Navy SEAL and human brick wall. Jake runs his own security firm, and they meet at a society wedding reception where Honey is filling in for a friend and Jake is running security. The wedding, coincidentally, is the same one from Book One in the series, tangling the story lines together rather nicely.

Jake has a host of his own issues and insecurities, not the least of which is the looming deadline on his arranged marriage in Italy. Honey's tendency toward chaos doesn't fit in with Jake's neat and tidy lifestyle, but he's inexplicably drawn to her -- opposites attract, after all. The more time he spends with her, the more he loosens the tight grip he's got on his buttoned-down life, and the more he begins to realize he wants more than the future he's mapped out.

The back and forth between the characters is such fun to watch, as is the transformation of Jake's character as his walls begin to crumble, his assumptions about life tangled into a knot and unraveled in new ways, thanks to Honey. Ms. O'Shay writes with heart and humor and keeps the pages turning.

This is a standalone story, and although the other characters and events are mentioned here you can read the series in any order without spoiling the underlying plots. Although the story starts after Halloween and runs through Christmas, this makes a great read for the beach or poolside. Grab a copy for your summer reading on AMAZON