A Ghost Tale For Tuesday 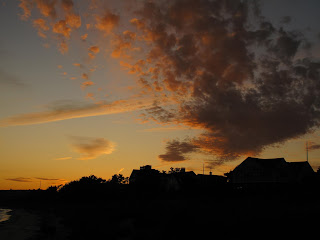 I'm falling behind on my NaNoWriMo word count, and am still working to get the Holiday Issue of the magazine online... and I didn't think to line up a story teller for this week. Darn! I've had a few people say "Sure!" and sound enthusiastic, but then... nothing. If you have a true-tale ghost story you'd like to share, please email me! I'd love to share it here on a Tuesday....

On Friday the 13th, my daughter's girl scout troop decided to join their old Brownie troop for a camp out. Thank goodness it wasn't a tent-out, because of the Nor'easter that blew across the Cape Friday and Saturday. No, it was the annual mother-daughter sleepover, held this year at one of the local churches, a big old wooden building that's been standing on Main Street for at least two hundred years.

About twenty girls and their moms in total attended the event, and we spent the first three hours creating holiday crafts for our winter money-making sale in early December. The cacophony of the Fellowship Hall was almost unbearable. Then we settled the girls down just a smidgen to have a ceremony, learn some camp songs, and put on a few skits. Typical girl scout stuff. By eleven o'clock, most of the moms had gone home (not wanting to sleep on the hard floor, and who can blame them?) and those of us left sent the girls to wash up and get ready to go to sleep.

There were four of us left in the Fellowship Hall, sweeping up the glitter and feathers, and chatting. The girls and the other mothers were at the far end of the church, too far away for us to hear them, or for them to hear our gossip.

I swept up the stage area, and I closed the stage curtain and the doors on either side. I knew there was no one left in that area, although at that moment my only thought was never to bring feather boas to an event like this again. The mess...!

As I finally sat down to take a rest, we heard noises coming from behind the stage curtain. "Did someone come back upstairs?" I asked. I walked quietly to the stage door, and opened it, looking for the girls who should really be in bed. The lights were still off. No one seemed to be there. The noises had stopped. I got a little chill, and decided to just close the door without further investigating.

Just as I sat back down with the other moms, the noises started again. It was as if they were echoes of the prior cacophony. Not voices, but jumping and scraping and folding chairs being pushed about. Another mom (braver than I was?) jumped up and went to the door. She flipped on all the lights and the sounds again ceased. We heard her walk slowly along the stage, hidden by the curtain but her footfalls echoed clearly. She came out of the far door, turning off the lights as she exited. "No one," she said, her eyes a little wider.

I was very glad that we were sleeping in a different room, down the hall and down the stairs, and away from where the spirits were playing. Ghosts of girl scouts past? I unplugged the portable organ, just in case. Didn't want them firing up the camp songs in the middle of the night...
Posted by Katie O'Sullivan at 8:45 AM

Email ThisBlogThis!Share to TwitterShare to FacebookShare to Pinterest
Labels: ghost tale for Tuesday