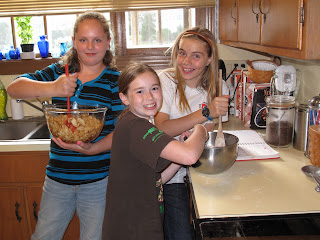 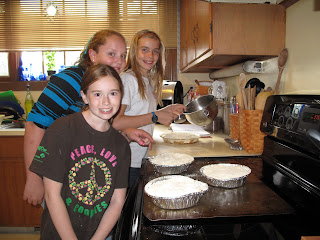 I'm not "technically" (see the finger quotes wagging) a Girl Scout leader this year. My daughter and her two friends are the only Cadette-aged girls who've signed up and you need at least 5 to form a troop. So I'm "technically" (wag wag) a volunteer advisor helping three girls who are going it on their own. Together.

One of the things they all said they'd like to do more of is cooking, so this week we learned how to make apple crisp. A neighbor had dropped off a large bag of apples, leftover from the pies she'd made last week. They haven't been popular in the lunchboxes ("boomerang" apples, cuz they kept coming home), so I thought we'd just get "rid" of them.

The girls are all 11 years old. Old enough to know how to handle a paring knife in the kitchen, but it took longer to show them how to cut, core and peel an apple than I had anticipated. Some things seem so basic in the kitchen, and yet you forget that kids have to learn it somewhere. And only my daughter knew what a pastry cutter was. Is it that obsolete?

Before we started we talked about kitchen safety and cleanliness. Basically, no fooling around and lots of hand washing. And instead of making the one big apple crisp that the recipe calls for, we divided it into individual pans so the girls could take them home to share with their families for dessert. The rest went into a larger pie plate that my family had for dessert (hey, the boys have to get something out of this Girl Scout deal.) 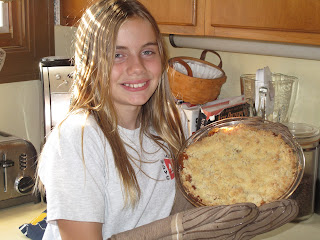 While the apples were baking, the girls sat down and learned how to copy a recipe onto a recipe card, and about various abbreviations you find in cookbooks. The recipe we used - and that they now have for their families - is a traditional Vermont apple crisp, a favorite at the Grey Bonnet Inn in Killington. It's easy to make and tastes delicious - even when the girls mangle the apples in he peeling and cutting. Just don't think about the calories ;-)

Mix these ingredients and place in buttered pan.

Lightly blend ingredients. Use pastry cutter if you have one. Sprinkle dry mixture on top of apples.

Bake at 375 degrees for about an hour, until browned and bubbly. Best served warm with vanilla ice cream.

Posted by Katie O'Sullivan at 8:39 AM