Have You Heard About The String Bridge? 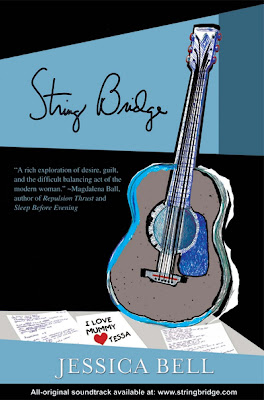 Last April, I participated in the A to Z blogfest, and met so many new wonderful bloggers - one of whom was Jessica Bell at the Alliterative Allomorph. Jessica lives in Greece - I love Greece, having done some island hopping there during one crazy October break during college. But her story is more complicated than just living on the other side of the world from me.

Here's part of her bio:

Jessica Bell is a literary women's fiction author, poet and singer/songwriter who grew up in Melbourne, Australia, to two gothic rock musicians who had successful independent careers during the '80s and early '90s. She spent much of her childhood traveling between Australia and Europe, experiencing two entirely different worlds yet feeling equally at home in each environment. She currently lives in Athens, Greece and works as a freelance writer/editor for English Language Teaching publishers worldwide, such as HarperCollins, Pearson Education and Macmillan Education. In September 2012 Jessica will be hosting the Homeric Writers' Retreat & Workshop on the Greek island of Ithaca, home of Odysseus.

(Gothic rock musicians as parents? How cool, right? And all that traveling as a kid? I would have loved that! And a Homeric writer's retreat? I wanna go!)

When she announced that her first novel was being published this November and asked for help promoting the release, I signed right up - along with about 100 other bloggers!

You've probably seen reviews and interviews posted last week all around the blogosphere. Like over at UNEDITED where Jen Daiker always does an amazing blogging job and has posted a review today. Or over at THE CHARACTER DEPOT where J.L. Campbell has a great interview with Jessica. There's probably a complete list of the stops on Jessica's blog tour somewhere, but if you check out her blog she gives you links each day to where she'll be appearing and who's posted new reviews. (so... scroll backwards in time to see who's already posted... so many great bloggers helping Jessica get the word out about this book!)

This week there's more of those reviews and interviews, as well as a special event called an Amazon Chart Rush. It's going to happen on Friday - and I'll have all the details posted then!

In addition to String Bridge, Jessica has published a book of poetry called Twisted Velvet Chains. A full list of poems and short stories published in various anthologies and literary magazines can be found under Published Works & Awards, on her website at http://www.jessicacbell.com/

In the meantime, you can check out all Jessica's sites and details - - including the stuff about that writing retreat in Greece! - - at the following spots: