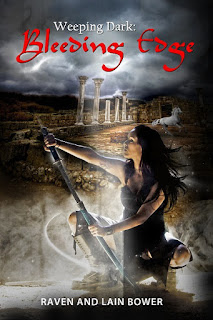 Hi, Raven! Thanks for joining me today to celebrate your new book! Give us a brief bio and talk about what kind of books you like to read and write.


A: Hi! I'm Raven, part of the Raven & Lain (my hubby) Bower writing team. We live in northern Michigan with our kids - both the furless kind and those with fur and some with scales  :D


We write fantasy, urban fantasy and horror - but I read across the spectrum of genres. Okay, I don't read literary, historical or mystery fiction but everything else is fair game! Lain likes epics and fantasy.


What's your favorite part of being an author?


A: The adventure! Delving into the gritty world of Primal, exploring the fantasy world of Weeping Dark: Bleeding Edge - entering battle! All without leaving my desk, hehe


What’s your approach to writing? Do you plot or go with the flow?


A: A hybrid mix of the two, actually. I spend a lot of time running my characters through what could be considered rehearsals - visualizing the story from start to finish in my head, much like a movie. This allows me to see where plot flaws are or what type of decisions and reactions the characters would have in advance. Then I tweak the plot accordingly, create the plot cards and off we go to the rough draft.


However, though my plots rarely ever change much from the original concept (because of the rehearsal time) they still change here and there. Since I don't believe in forcing characters or situations, this means going with the flow as well, even though the main skeleton of the plot remains mostly the same.


If you could have one superpower, what would it be?


A: Telepathy! Muahah. That would be so fun.


Tell us about your new release, WEEPING DARK: BLEEDING EDGE


A: Weeping Dark: Bleeding Edge is the first book in an epic fantasy series. So far, it looks to have about 6-9 books - depending on how persnickety the characters decide to be! It's a sweeping tale that adventures across the world of Farath and into the heart of a warrior - Shayla Dormyr, the heroine - as she battles for her people, her heart, and her soul.


A: Oooh let's see. I'd cast Karl Urban as the hero, Daibryn. For Shayla, she'd be difficult because Shayla is so strong in my head as 'Shayla' that it’s hard to see someone else in her shoes, if that makes sense. I often run across actresses that I think would be neat to play her, but my choices change with my mood on that, lol

(I love Karl Urban! Great choice!) So, Raven - Where can readers find your books and where can you be found on the web?


Or I keep an updated list with short blurbs on the side bar of my blog here: http://www.ravenbower.com/blog


We can be stalked at the blog (listed above) or on:


Thanks so much for chatting with me today! Can’t wait to read your new book!  (I’m rushing over to Goodreads to add it to my TBR list!)