Year of the Snake Blog Hop and Giveaways! 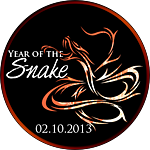 It's here! *throws confetti* The Year of the Snake! Thanks, Wendy Russo, for putting this blog hop together! (There's a list of participant links at the end of this post - pour another cuppa and go blog hopping to read some cool excerpts!)

According to Chinese Zodiac, the Snake occupies the 6th position on the wheel, symbolizing such character traits as intelligence, gracefulness and materialism. When it comes to decision-making, Snakes are extremely analytical and as a result, they don’t jump into situations.

Sounds good, right? Okay, so truth be told, I was born in a Snake year. Intelligent and graceful, uh huh. But then... I find out that the Zodiac description goes on to say...

"Snakes are effective at getting the things they want, even if it means they have to scheme and plot along the way."

Say what? Deceptive? Me? Maybe I'm taking this a little too personally...

Anyway, this blog hop is actually all about Deception. Participants are encouraged to search through their books or WIPs to find a passage that embodies the Spirit of the Snake.

I thought I'd choose a short passage from my upcoming YA novel, SON OF A MERMAID, being published this year by Crescent Moon Press. The book's due to make a splash in May, so I can't offer a copy of the novel as a prize, but I do have one of these uber-cute 3" tall mermaid ornaments that my Cape Cod Girl Scout troop made - check it out: 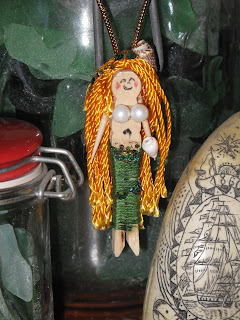 No, the Nantucket scrimshaw isn't part of the prize, nor is the sea glass. Just the mermaid. (You know you want it!) Here's how to win:

1. Read the following short passage from SON OF A MERMAID.
2. Leave a comment below, naming the character who best embodies the Snake.
3. Blog, Tweet or Facebook about this blogfest. Go ahead. I trust you to do the right thing.

The winner will be chosen by my ultra-scientific pulling-names-out-of-a-hat method.(*Disclaimer: Not going to ship overseas- U.S. and Canada only*) One of these days I'll figure out Rafflecopter. Maybe someone will help me. (Maybe I'll trick someone into helping me...)

Anyway, without further ado, my SNAKE excerpt from SON OF A MERMAID:

Kae spotted a large, dark-eyed merman seated at the King’s right, a thin gold crown upon his dark head. His skin was slightly olive, and she could see that his tail was dark green, with not a fleck of gold shining among his scales.


The Prince looked young next to the elderly King, but she knew a merman’s looks could be deceiving. He could be the same age as she, or he could be over one hundred years old. Still, he looked too young to have done all of the terrible things he was rumored to have done.


King Koios arose as the entourage entered the Great Hall. “Ah, here she is. Brynneliana, my darling daughter.” He gestured to the crowned merman at his table. “The Prince has arrived early, with word from your cousin, Theo.”


The Prince’s laughter rumbled through the water, causing shivers to run down the length of Kae’s tail. The Southern Prince rose, and swam to where Brynn had stopped short. “Prince Demyan, at your service, my lady. I must say, you are even more beautiful than was described to me, Brynneliana, like a delicate sea flower.”


His voice was low and scratchy, causing the back of Kae’s neck to prickle as she watched him take Brynn’s small hand with his larger one, bending to brush his thin lips against her skin. Kae imagined it took all of Brynn’s royal training to resist yanking her fingers from that grasp, for despite the circle of gold on his head the merman seemed more sinister than sincere.


Kae took in the prince’s dark eyes, his overly muscular forearms and his scales the color of dying seaweed. She swallowed the bile rising in her throat, as her princess said formally, “It’s good to finally meet you as well, my Prince. I have heard much about you.”


The Prince narrowed his eyes as if to decipher a hidden meaning in those simple words. His face relaxed just as quickly, giving nothing away as he replied, “You can’t believe every story swept northward on the current, the same way we in the Southern Court try to ignore those rumors that drift southward about you, my dearest Princess.”


THIS IS A BLOG HOP - NOW VISIT SOME OF THE OTHER COOL SITES:

Email ThisBlogThis!Share to TwitterShare to FacebookShare to Pinterest
Labels: #Giveaway, blogfest, mermaids, SON OF A MERMAID, Year of the Snake