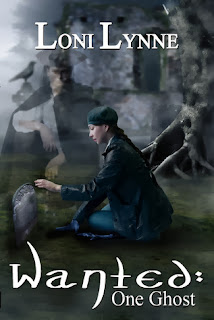 
Published by Crescent Moon Press, May 2013

Stuck in ghostly limbo for 238 years, James Addison can't move on to an afterlife. After being falsely accused of treason and executed, fate's cursed him to remain an earth-bound specter until he meets a historian sent to research his past.

Distrustful of fate, Dr. April Branford wants to be taken seriously, but her unique ability to divine history by touching objects seriously compromises her credibility. Her latest assignment? James Addison, a legendary colonial ladies' man with a shadowy past.

Without much to go on, she doesn't hold out much hope to discover the man behind the legend until the day she accidentally touches him and brings him back to life. With the help of family and ghosts from James's past, they unravel the truth. But after falling in love and with time running out, it's hard for April to believe in fate and a future where forever is now.

I do love a good ghost story, especially one that mixes in romance and suspense without the gore or horror. Add in a little historical twist to it all and I’m hooked.

WANTED: ONE GHOST, by Loni Lynne, has it all – a historical ghost story full of intrigue and murder, a handsome ghost with the reputation of a rake but the heart of a gentleman, and a strong female researcher with unique psychic powers to unlock a 200-year-old mystery.

Dr. April Branford doesn’t want to acknowledge her “special” powers, or the fact that her family is all a bit strange, each having a unique psychic gift. April’s gift is psychometry, the gift of being able to tell an object’s past by touching it, and it comes in handy in her job as a historian. On a job in the historic town of King’s Mill, her gift gets a little out of hand, and actually brings a ghost back to life! Not just any ghost, but the very one she’s in town to research.

James Addison has been stuck in limbo since being hung for treason early in the American Revolutionary period. When April’s touch brings him back to life, he’s torn. He wants to help her find the truth and have his spirit set free, but he also finds himself falling in love with April’s modern, independent spirit, and wants to stay with her forever…

I love the way the author writes the story from both points of view, and infuses touches of sarcastic wit and humor throughout. The chapters that we see through James’s eyes give a wonderful – and often funny – perspective on modern life through the eyes of a colonial-era gentleman. The romance that blossoms between James and April is both sweet and full of heat, and will have you rooting that the author finds a way for them to be together forever.

Looking for a ghost story to read this Halloween season? Grab a copy of WANTED: ONE GHOST – you won’t be disappointed!
ABOUT THE AUTHOR:

Born in Michigan, Loni grew up all over the mid-west. From Michigan to Texas and everywhere in between before joining the Navy and meeting her Army husband. Together they were stationed in Hawaii for four years before returning to settle close to family in Maryland.

Raising two beautiful daughters, Loni went from being a domestic goddess to a writer and finally a published author when her husband gifted her with a laptop,portable hard drive and a membership to Romance Writers of America for her birthday and challenged her to, 'finish a book by her next birthday'. She now has many stories but Wanted: One Ghost is her debut.