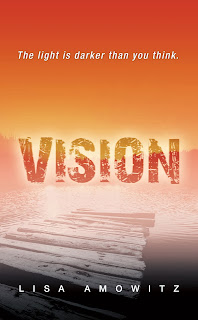 When the Cover Contessa was looking for people to help with this cover reveal I signed right up. The blurb really captured my imagination, and the cover is pretty cool as well. VISION isn't being released until 2014 from Spencer Hill Press, but I already know I can't wait to read this one! Here's the full blurb:

The light is darker than you think…

When seventeen-year-old Bobby Pendell begins to have blinding migraines followed by frightening hallucinations, he fears there’s something wrong with him. Then murder rocks his sleepy town and the visions that put him on trail of a killer—also make him the prime suspect. 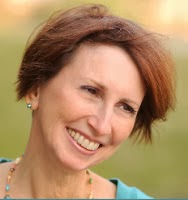 Lisa Amowitz was born in Queens and raised in the wilds of Long Island, New York where she climbed trees, thought small creatures lived under rocks and studied ant hills. And drew. A lot. She is a professor of Graphic Design at her beloved Bronx Community College where she has been tormenting and cajoling students for nearly seventeen years. She started writing eight years ago because she wanted something to illustrate, but somehow, instead ended up writing YA. Probably because her mind is too dark and twisted for small children. Lisa is represented by Shannon Hassan of Marsal-Lyon Literary Agency.