Book Review: When You Reach Me, by Rebecca Stead 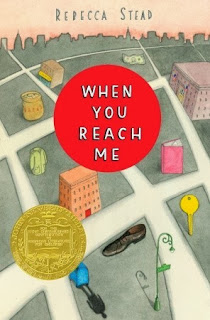 About the Book: (from Goodreads)

Four mysterious letters change Miranda’s world forever.
By sixth grade, Miranda and her best friend, Sal, know how to navigate their New York City neighborhood. They know where it’s safe to go, like the local grocery store, and they know whom to avoid, like the crazy guy on the corner.

But things start to unravel. Sal gets punched by a new kid for what seems like no reason, and he shuts Miranda out of his life. The apartment key that Miranda’s mom keeps hidden for emergencies is stolen. And then Miranda finds a mysterious note scrawled on a tiny slip of paper:

I am coming to save your friend’s life, and my own.
I must ask two favors. First, you must write me a letter.The notes keep coming, and Miranda slowly realizes that whoever is leaving them knows all about her, including things that have not even happened yet. Each message brings her closer to believing that only she can prevent a tragic death. Until the final note makes her think she’s too late.

My Take:
Wow! Five stars and two thumbs way up...

This book wasn't at all what I expected, and I'm so totally sorry that I didn't take my daughter's heartfelt recommendation more seriously soon after it first came out. A friend of hers did a 5th grade book report on it, and she came home raving about how cool it sounded and made me buy it the very next day at the bookstore. In hardcover. And still I resisted reading it for myself, mostly because I didn't like the cover.

I shouldn't have resisted.

This middle grade time travel fantasy makes near constant reference to Madeleine L'Engle's A Wrinkle in Time, which is both the protagonist's favorite book and a touchstone reference for other main characters (as well as a timeless classic.) This book is set in a borough of New York City in the late 1970s, which is both close enough to present day for kids to relate to the details and far enough in the past to be "exotic"... and since the author gets the details down perfectly, it's like a blast from my own middle grade past.

At its heart, this is really a story of a middle school girl going through the angst of growing up, losing her best friend and being forced to make new ones, confronting racism, social prejudices, first crushes, and first impressions. Plus, there's the time travel thing. And it features the $20,000 Pyramid.

What more could you want from a 70s story?

Rebecca Stead does a masterful job of making Miranda a likeable character that middle school kids can easily relate to. Stead shows her characters reacting to real-life situations, making mistakes and working through them, instead of preaching about the right way to handle problems or combat social injustice.

The book unfolds in fits and starts, reminding me of The Time Traveler's Wife, which I absolutely loved, but on a middle-grade/YA level, which I found intriguing.  At only 199 pages, it's a very fast read once you become absorbed in the story. Whether or not you figure out the mystery alluded to in the book's blurb before Miranda figures it out is not the point. This is a coming-of-age story wrapped in a mystery surrounded with a vortex of time travel... as I said before, what more could you want?