Today I'm excited to introduce you to a new author and her exciting new paranormal romance, DAKOTA CAPTIVE. 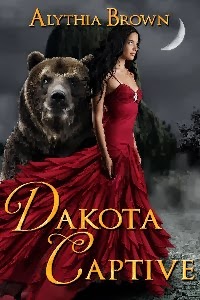 So all she has to do is try to keep her big mouth shut, get her memory erased and go home, right? Wrong. Because Jumlin's Offspring are stalking Charli. And since no one can explain this unusual behavior, it becomes imperative to enter the Other World for sanctuary. Now if only she can figure out why she's beginning to fall for one of her abductors on top of everything else...

Sounds intriguing, right? I can't wait to read this one. And now, a little Q&A with the author, Alythia Brown!

Hi everyone! I'm an author, wife, and mom who lives in Northern California. I typically read fantasy but I'm not against picking up something new that sparks my interest in the bookstore or library. I would eventually love to branch out into different genres but, for now, I've only published fantasy works. Something about being able to create a new world with exotic rules is especially fun for me.

Holding a book and knowing that I not only created the contents but managed to get it in print! I used to staple my drawings together as a kid and call them books. I think I've always secretly wanted to be an author.

3. What's your approach to writing? Do you plot or go with the flow?

I always start writing the first few chapters in a journal with no plot in mind. I just "listen" to what's happening in the beginning of the story. If I decide it's something I want to pursue, I transfer it all over to my computer and use the journal for brainstorming notes and plot diagrams.

When I was little, I would have said I wanted to fly. Which, granted, would still be awesome. But, with three small kids and a husband around, I think I would love the power to twitch my nose and instantly make a room clean, like Samantha from Bewitched. Then I wouldn't waste extra time on tedious housework!

5. Tell us about your new release, DAKOTA CAPTIVE

Charli is a teenage girl who finds herself held prisoner by four Lakota Earth Spirits who are pretty upset that she has witnessed their sacred secret. The day she hid behind that boulder and watched as four animals shifted into people was not only disturbing but apparently reason enough to become a kidnap victim. Their plan is to take her to Pale Horse, the shaman who can erase her memory, but the group hits some bumps along the way. For instance, Jumlin, the demon prowling the Earth in the form of a man, is extremely interested in Charli.

I can honestly say I do not have names to fill this dream cast. I think I would rather find passionate, undiscovered actors whose faces aren't already associated with other roles.

You can find me and my book in some of these places:

Dakota Captive in Print  Barnes and Noble and Amazon

Dakota Captive for Kindle
About the Author: 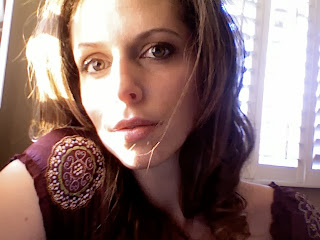 Alythia Brown was born and raised in the San Francisco Bay Area where she now lives with her husband and their three small children. She found her inspiration to write Dakota Captive after traveling to North Dakota to return an authentic peace pipe to the Sioux Natives. The artifact had been picked up after the Massacre of Wounded Knee in 1890, and eventually ended up in the hands of one of her ancestors—who, in turn, told everyone it was a wagon spoke. Alythia is the author of two short stories, published in the Mertales anthology, and she aspires to publish many more books for children, teens and young adults.
Posted by Katie O'Sullivan at 5:00 AM