Book Review: SAY NOTHING OF WHAT YOU SEE by Christy Effinger, #TWRP 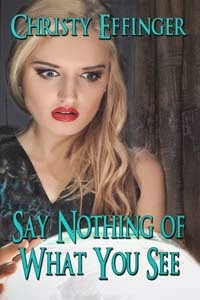 Say Nothing of What You See, by Christy Effinger
Published 2014 by The Wild Rose Press


When her aunt steps off a grain elevator into the emptiness of a prairie evening, Mira Piper loses her one protector. Chloe, her flighty mother, impulsively drags her daughter to Bramblewood, an isolated spiritualist retreat in northern Michigan, run by the enigmatic Dr. Virgil Simon.

Chloe plans to train as a medium but it's Mira who discovers she can communicate with the dead. When her mother abandons her, Mira discovers a darker aspect to Bramblewood: the seemingly kind doctor has a sinister side and a strange control over his students.

Then one winter's day Troy Farrington arrives, to fulfill his mother's dying wish and deliver her letter to the doctor. But calamity strikes and he finds himself a captive, tended by a sympathetic Mira. Haunted by her dead aunt and desperate to escape Bramblewood, Mira makes a devil's deal with Dr. Simon. But fulfillment comes with a steep cost...betrayal.

Christy Effinger's debut novel is a dark psychological thriller with a definite noir feel. The story starts slowly, in fits and starts of reflections and backstory, but once it gets rolling it sweeps you along on a psychological roller coaster through dark emotions and human frailty.

Seventeen-year-old Mira Piper just wants to finish high school, leave for college, and never look back. Her neglectful mother with the string of abusive boyfriends are anchors dragging her down, her Aunt Charlotte the only thing keeping Mira afloat.

When her aunt commits suicide right before her eyes, Mira feels abandoned, damaged, unloved, and unloveable. She barely protests when her mother upends their lives to seek the enigmatic Dr. Simon, a creepy and controlling spiritualist who trains mediums in a remote rural setting.

Once in Dr. Simon's clutches, it becomes clear he has an iron  hold over his disciples and the townspeople, and a strange fixation with Mira. The way the author describes Dr. Simon and his predatory attention to the young girl send shivers down your spine, triggering all kinds of warnings that Mira is too emotionally damaged to see. When her mother leaves the mansion, and leaves her behind, Mira feels she has no choice but to stay and do what the doctor tells her.

When the doctor crosses a line by hurting and imprisoning a young man, Mira's conscience begins to dig itself out of the hole where it was hiding. She's never been strong enough to stand up for herself, but can she defy him when someone else's life is on the line?

Parts of this book seem to fit with the New Adult genre, but others seem too slow, with flowing dark descriptions of inner turmoil.  Too contemporary to be truly noir, with not enough sexual tension to be firmly categorized as a romantic suspense, I had trouble fitting this book neatly into a genre. The writing is solid and the first person POV firmly draws you into Mira's emotional damage. I think it could have used a stricter hand in editing, as Mira rambles and repeats herself, but if you like slow-building,  psychological thrillers, give this book a try.