Friday Feature: Chatting with debut YA author, S.L. Bynum and a Review of her novel, GRIM CRUSH 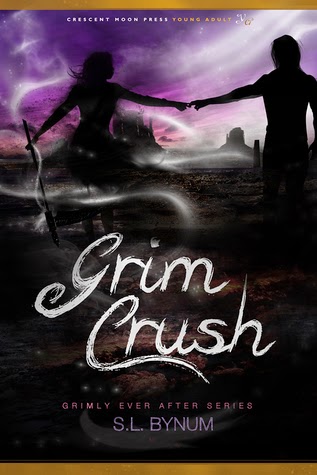 I am S. L. Bynum, a twenty-five-year-old who loves desserts, warm weather, and dancing when I’m by myself. Grim Crush is my first published novel. It was my first time writing paranormal romance, and I mostly write fantasy novels, such as epic or urban fantasy. Sometimes I write science fiction and mysteries. I read the same genres I write, although sometimes I read contemporary and romance too.

Creating my own worlds and characters with their own personalities.

Reach out to readers, not just other writers. Writers read too, but they’re not able to do it as much since they have to write too. I heard contacting book reviewers can help an author get more sales.

I would like to fly so I can travel around the world super fast without paying for gas or an airplane ticket.

5. Tell us about your new release!

It’s about Xia, a 17-year-old grim reaper who falls in love with a Native American human, which breaks the Rules of Reaping. So she gets in some pretty big trouble with her father/boss, the Angel of Death.

Taylor Lautner, when he had the long hair, would play my Native American character, Shilah. He would have his shirt off for several scenes, lol. Who I would get to play my main character Xia is a hard one. Maybe Zoe Kravitz from Divergent?


1. Do not interfere with someone's death.

2. Do not become emotionally involved.

3. Do not show yourself to the living.

As a grim reaper, seventeen-year-old Xia has to follow these Rules. But when she meets Shilah, a Native American boy who can see reapers, she figures the rules don't apply. To find out why he can see her, she pretends to be human, since carrying a scythe probably isn't the latest teen craze.

Things become unnerving as she begins experiencing first-time affection with Shilah, but she's irreversibly drawn to him. Suddenly Xia finds herself breaking Rule Two, even while collecting dead souls behind Shilah's back. It isn't long before she is caught red-handed by the Angel of Death himself, and then not only is her relationship at risk, but also Shilah's soul. And this leaves Xia wondering: can love overcome Death?

MY TAKE:
In the last year I've read several young adult books giving us a new take on the Grim Reaper, the hooded skeletal  figure of Death. All of them very different, but all agree on one point: there are more than one of the creatures fulfilling the task of escorting souls facing death. Some are angels, some are grim reapers, some are nice, some are scary.

Bynum creates a world where an entire organization of reapers exists, with a complex hierarchy, rules, and procedures, ultimately led by Death himself as the boss. In Bynum's world, the grims themselves aren't scary at all, but 24/7 workers tasked with meeting souls at their time and place of death to show them how to enter Purgatory for judgement. The grims exist in a place in between worlds, neither alive or dead, and can teleport at will around the globe to help dying souls.

In this world, Death recruits the souls of stillborn babies, raising them in the In-Between for 14 years until they apprentice to be reapers. The main character, Xia, is one of those reapers. She's a sweet 17 year old who does her job efficiently while still managing to thumb her nose at protocol and procedure. But she's never contemplated breaking the Big 3 Rules that govern all reapers. That is, until she meets Shilah, a Native American boy who can see her and touch her, something no one else has ever done with a reaper.

Now she's breaking Rules and falling in love, but will she break the biggest rule of all and defy Death himself?

This is a nice premise for a book, and despite the paranormal bent and the age of the characters, it's more of a young YA contemporary romance, exploring emotions and feelings stirred by first love. The first person narrative is all in Xia's point of view, which sounds naive but sweet. Most of what counts for action focuses on rule breaking with the most innocent of sexual tension. There are page-turning plot points in the last few chapters when Xia must figure out if she wants to break Rule 1 and how she can change Death's decree.

I enjoyed this young YA read, but kept hoping for more adventure. Bynum weaves a good tale, but the tension and the stakes never got high enough. I think the author is capable of even more. Now that she has this world established, I'd be interested to see if there will be a sequel. I'd recommend this for a quick, sweet read, but don't expect any scary skeletons.
Posted by Katie O'Sullivan at 5:00 AM