Monday Book Review: THE FALL OF FIVE, by Pittacus Lore #YA 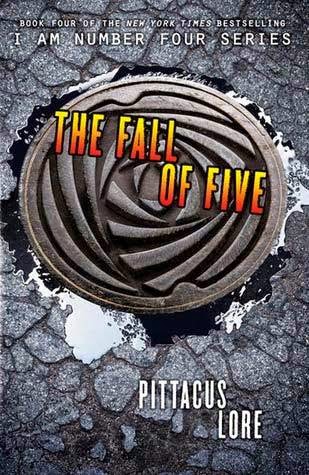 The Fall of Five (the Lorien Legacies series), by Pittacus Lore
Published August 2013 by Harper Teen


The Garde are finally reunited, but do they have what it takes to win the war against the Mogadorians?

John Smith—Number Four—thought that things would change once the Garde found each other. They would stop running. They would fight the Mogadorians. And they would win.

But he was wrong. After facing off with the Mogadorian ruler and almost being annihilated, the Garde know they are drastically unprepared and hopelessly outgunned. Now they’re hiding out in Nine’s Chicago penthouse, trying to figure out their next move.

The six of them are powerful, but they’re not strong enough yet to take on an entire army—even with the return of an old ally. To defeat their enemy, the Garde must master their Legacies and learn to work together as a team. More importantly, they’ll have to discover the truth about the Elders and their plan for the Loric survivors.

And when the Garde receive a sign from Number Five—a crop circle in the shape of a Loric symbol—they know they are so close to being reunited. But could it be a trap? Time is running out, and the only thing they know for certain is that they have to get to Five before it’s too late.

The Garde may have lost battles, but they will not lose this war.

I'm a fan of this series, although I have to admit thinking none of the subsequent books live up to the promise of the first. That first book in the series is such a wonderful blend of action, adventure, aliens and teen angst that it hooked me on these characters and their struggles.

In the books that follow, the author has relied more on the action and adrenaline to further the story lines and much less on authentic emotions. Even aliens have emotions; that's part of the draw of the first book - how alike the human and Lorien races are. And how teenage emotions can cloud even the bravest hearts.

Spoiler alert: if you aren't up to date on the series but plan to read them, skip the rest of this review, or at least down to the last paragraph!

For example, in the last book, John is finally reunited with Sarah at the end, and are together throughout this book, but we don't see any emotion or interplay between them that goes beyond the mission. The author almost gives us a glimpse a few times, but backs away from emotion in favor of upping the action instead. John should also have to deal with his attraction to Six (and their kiss), which is also glossed over in a most unsatisfactory way by both John and Six. And Sam, who is head over heels for Six, but can't seem to tell her. Nine almost gets a growth arc but it never fully realizes, nor does he learn to speak without expletives or treat other people with respect. Too bad. Sam has chapters in his own POV, which seem shallow and whiny, given his character and situation. He already had his growth arc, yet now he reverts to insecure.

Don't get me wrong, the action is great. The situations and dialogue keep you turning pages at an alarming rate, but the emotional depth is missing. I felt that in the last book as well, which is how I was able to wait for this installment to come out in paperback. And I can't decide if I will even buy the next book or not. I may wait and borrow it from the library.

If you're a fan of the I Am Number Four series, of course this is a must read. If you haven't read any of them, try book one. And maybe stop there. You decide.