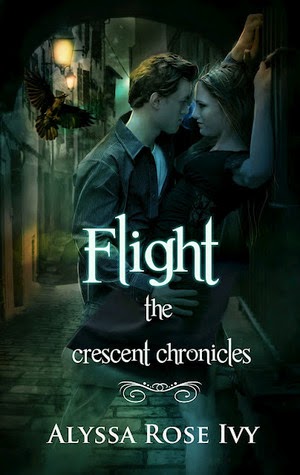 
Sometimes you just have to take flight.

A summer in New Orleans is exactly what Allie needs before starting college. Accepting her dad’s invitation to work at his hotel offers an escape from her ex-boyfriend and the chance to spend the summer with her best friend. Meeting a guy is the last thing on her mind—until she sees Levi.

Unable to resist the infuriating yet alluring Levi, Allie finds herself at the center of a supernatural society and forced to decide between following the path she has always trusted or saving a city that might just save her.

MY TAKE:
Alyssa Rose gives us a new take on an urban legend, with this New Adult paranormal series, The Crescent Chronicles. She creates brand new creatures at the top of the New Orleans food chain, moving the vamps and where's down the line and introducing us to Pterans, winged humanoids who seem part angel, but sometimes devilish in their actions.

The story is told from the first person POV of Allie Davis, a rich recent high school grad from NYC. She's taking the summer before Princeton to live in New Orleans at her father's newest acquisition, the venerable and historic Crescent City Hotel. On the very first day she spies Levi across the hotel lobby and sparks fly.

As she gets to know the Tulane senior, she finds that there's much more to New Orleans than meets the eye, and Levi has more secrets than he's willing to share. He opens his world and his heart to her, but is she willing to trade her dreams and plans for Princeton and her future...for something darker and more dangerous? Is she willing to let go and fall in love?

Will Allie get through the summer with her heart intact? Or for that matter, will she make it through alive? Believe me, these are all questions that you start wondering about pretty early on, and the author does a great job of making you need to find the answers.

Despite some spots where the writing gets bogged down, this was a fast paced totally engaging book with a fresh take on New Orleans and urban paranormal. I'm excited to see where the author takes these characters and what else she can throw at Allie. If you like NA paranormal, or if you're a fan of Sookie Stackhouse's version of the south, check out Alyssa Rose's FLIGHT.