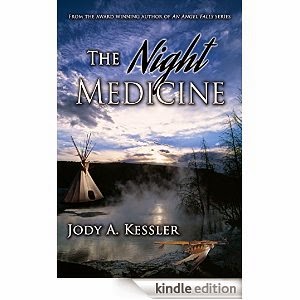 The Night Medicine, by Jody Kessler
Published March 5, 2015
*Available for pre-order today and for sale tomorrow for your Kindle!!*

I received an advance reader's copy of this book in exchange for my honest review. I read this last month, and while it's very different from Ms. Kessler's YA series, Angel Falls, I enjoyed it and recommend this to readers who enjoy historical fiction and Native American lore. Available tomorrow from Amazon for your Kindle!


In 2012, Blackfoot tribal member, Dean Wolfsblood, is the reluctant guardian of a centuries old medicine pipe that makes time travel possible. When Dean’s former Marine buddy, Badger Lowell, bribes him to take the arduous trip into the past, the last thing either of them expects during the “Night Medicine” ceremony is for an intruding grizzly bear to chase Kai, a beautiful and complicated Cree woman, into the past with them.

Upon arrival in 1868, the three unlikely companions discover deceit, murder, buffalo hunters, and a kidnapping waiting for them as they travel across mountains and plains to the gold mining town of Helena, Montana. As hidden motivations are exposed, secrets are revealed, and all well-meaning plans for their journey are cast away into the winds of time.

Can they survive history and each other long enough to make it back, or will the past change their futures forever?

Jody Kessler weaves an intricate tale of Native American folklore, with damaged characters traveling through time to heal old wounds, both psychic and historic. Filled with action, adventure and complex characters, THE NIGHT MEDICINE makes for an intriguing read.

The main character is Dean Wolfsblood, a member of the Blackfoot tribe who grew up on the reservation. His parents disappeared when he was young, so he was raised by his grandparents. His grandfather was the tribal medicine man and keeper of a sacred object, the Dragonfly pipe, which legend says can make time travel possible. Using a complicated combination of song, dance and cleansing known as the Night Medicine, teenaged Dean traveled with his grandfather 144 years into the past. The grandfather died recently, and the sacred pipe has been passed to Dean.

But Dean himself is a broken man. A former Marine who did several tours in the Middle East, he drinks to forget the things he's seen and done, and the catastrophic losses he's endured. When we first meet him, he isn't likeable. His language is coarse, his thoughts harsh, his actions selfish. I didn't  see any redeeming qualities in the guy, and will admit I almost put the book aside - but I'm so glad I stuck with it.

Another former Marine comes to town to find Dean and convinces him to sober up and use the Night Medicine to travel into the past and right old wrongs. Kai works part time at the bar where Dean regularly gets drunk. She seems guarded, bitter, judgmental, and pretty unlikeable. An unlikely connection forms between her and Dean despite themselves. When she stumbles into the Night Medicine ceremony, the reader is not surprised that she gets swept back into the past with Dean and his friend.

The descriptions of life in 1868 are beautiful and interesting and totally compelling to read, as are the lyrical Native American folk tales sprinkled throughout the book. As the story progresses, Kessler peels back the layers of complexity from both Dean and Kai. We learn the secrets that they so carefully shield from the world, and we start to like and root for them to find forgiveness and happiness.

The time travel aspect sucked me in, but this is not a traditional time travel romance. In fact, the romantic tension is a very minor part of the tale. It's more a story of discovery, redemption and human frailty, and in the end I really enjoyed the way it all unfolded. Don't get me wrong, the book is jam packed with action and adventure, as well as plot twists and turns that kept me up and reading after midnight. Not a quick or easy read, as Kessler packs so much Native lore and tradition into each chapter, but well worth the time.

4 stars out of 5, only because I wish the characters of Dean and Kai had been more sympathetic right from the beginning. But once I got invested, there was no going back. THE NIGHT MEDICINE is compelling read.