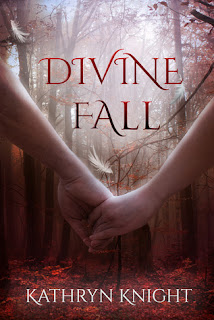 
After tragedy tears Jamie Brandt’s life apart, her only goal is to finish high school so she can leave her small hometown behind. In the meantime, riding her horse is her main source of solace, until a mysterious stable hand shows up at the barn. There’s something not quite right about the handsome new employee, and the more Jamie sees of him, the more determined she becomes to figure out what he’s hiding.

Dothan Reed came to historic Huntsville, Maryland, for one reason—revenge. But his plan can’t move forward until he finds the missing piece he needs to enhance his powers. As the only surviving Nephilim, Dothan is not only weaker than full-blooded angels; his forbidden lineage makes him an outcast in both worlds. When he discovers Jamie is the key to locating an ancient weapon, he’s forced to interact with a vulnerable human girl—a task that becomes more appealing with each encounter.

Jamie soon learns Dothan isn’t the only one with a dark secret. Each new revelation further threatens her safety, and Dothan’s betrayal shatters her heart. Forgiving him seems impossible, but the thought of turning her back on him is equally painful.

As their connection deepens, Dothan will have to make his own difficult choice: continue on his path of vengeance, or protect the girl he loves. And when Dothan’s actions thrust Jamie into an unforeseen danger, he must seek the help of his enemy…or risk losing her forever.

My Take:
An engaging and suspenseful YA tale of an ordinary high school girl struggling with the recent death of a parent, and high school bullying. Things start to change when she discovers the boy she's falling for is part angel and bent on seeking revenge for the death of his father.

Told in first person POV, our narrator Jamie meets the cute boy by falling at his feet. Well, falling off her horse at least. He comes to her rescue and sparks fly. Literally. Dothan is the new stable boy at the farm where she boards her horse, and his touch sends electric shocks scurrying through Jamie. Quiet and mysterious, his every word and action peak Jamie's curiosity, made all the more intriguing by the fact that he knows nothing of her past. Her story unfolds in slow fits and starts, as does Dothan's mysterious past.

As the two slowly grow closer, the heat turns up in more ways than one. The past has a way of catching up with characters, and everything is not as it seems. I struggled a bit with some of the dialogue and the fact that Jamie seemed a bit mature in her thinking for a newly minted 17-year-old girl with raging hormones... but given the hardships she'd already faced, I figured she had to grow up rather quickly.

While many of the plot twists were predictable, this was a fun YA paranormal romp, and while the pacing was a little slow, it was a quick read nonetheless. If you like reading YA angels, this offers a slightly new take on the angel/nephilim world and its relation to our own mortal realm.

Grab it on AMAZON.