Today I'm excited to spotlight a new romance anthology focused on modern cowboys and the women who can't get enough of them. Okay, that sounds a little cheesy, so maybe I'll let my friend Hebby Roman explain the thinking behind the latest endeavor she and a few other Western romance authors have put together for readers who like their cowboys.. Take it away, Hebby! 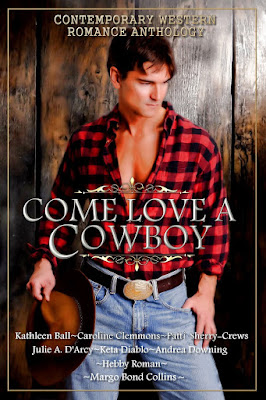 Last autumn ten authors got together to write a western historical Christmas anthology. We all enjoyed working together so much that we “kicked around” some other anthology ideas on our Yahoo Group Loop, and several of us decided to stay together and write another western anthology…but with a very different vibe.

On the one hand, our Christmas historical anthology was sweet and, of course, most of the heroines were defined by the acceptable roles of women in that time in history. Since some of us also write contemporary romance, we decided to do a contemporary western romance anthology and show how the roles of women in the West have advanced over time, as well as adding a little “steam” to our romances. Have to keep things interesting!

Eight stand-alone Contemporary Western Romance novellas from Bestselling and Award Winning Authors. From firefighters, bronco busters, and wealthy ranchers to bad boys, we have them all for you!  If you've ever wanted to fall in love with a sexy, alpha cowboy of today...now's your chance.

About the Individual Books:

Meg O’Brien hoped never to lay eyes on the one man who broke her heart. To her dismay, Luke Kelly arrives at her ranch a much different and broken man. Can Meg ever forgive his callous treatment of her and help Luke become the man he used to be?

Grant Me The Moon, by Caroline Clemmons

All Tory Fraser intended was to show her high school history club students a local archeology dig. How could she know the excursion would involve a murder?


Three for The Win, by Keta Diablo

Hollis should have known better than to fall for a bone-melting man like Stede. He’s gone now and Eli is left to pick up the broken pieces of her life.

When his partners’ daughter is kidnapped in México, a self-made millionaire must confront his feelings about their affair and the future of their relationship.

Mac has one week to convince his ex-girlfriend Clara not to sell his oil company. In this high-pressure reunion, can they strike love again?

The Shape of Destiny, by Julie A. D’Arcy

A young male shape shifter. A beautiful female ranch owner. Can love be born in a web of deceit?

A single mother struggling to keep her guest ranch puts her own desires on hold. When a handsome and persistent fireman sets his sights on her, she must decide how much she’s willing to give.

Kathleen Ball writes contemporary and historical western romance with great emotion and memorable characters. Her books are award winners and have appeared on numerous best-seller lists.

Caroline Clemmons is an Amazon bestselling author of historical and contemporary western romances whose books have garnered numerous awards. A frequent speaker at conferences and seminars, she has taught workshops on characterization, point of view, and layering a novel.

Keta Diablo lives in the Midwest part of the United States on six acres of woodland. When she isn't writing or gardening she loves to commune with nature. She adores animals and has made it her mission in life to help feed hungry children in the USA.

Andrea Downing has spent most of her life in the UK where she developed a penchant for tea-drinking. In 2008 she returned to live in the city of her birth, NYC, but frequently exchanges the canyons of city streets for the wide-open spaces of the West. Her western historical romances have won numerous awards, and she is a member of Romance Writers of America.

Patti Sherry-Crews lives in Evanston, Illinois, with her two children and husband. She has a degree in anthropology/archaeology, a fifteen-year stint as a shop-owner, a fondness for the British Isles and the Old West. Her aim is to create compelling characters who are smart and have interesting stories to tell. Armchair travel included.