Monday Book Review: A WOMAN OF COURAGE, by Marlow Kelly 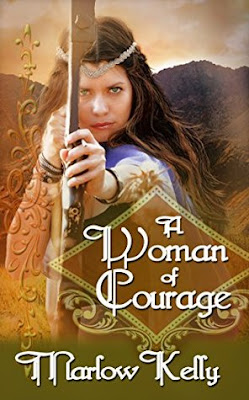 A Woman of Courage, by Marlow Kelly
Published 2015 by The Wild Rose Press


When an injured Fianna Byrne turns up at Connell O’Neill’s gate twelve years after their separation he knows this could be his last chance to find happiness with the woman he loves.

False accusations against Fianna had strained relations between their clans and forced Connell, under Irish law, to divorce her. Their disastrous three-month relationship left Fianna pregnant and heartbroken. She has avoided Duncarraig and her ex-husband ever since.

But with her home obliterated by the Vikings, Fianna must face her past in order to save her son, and prove once and for all she is a woman of courage.

Historical romance isn't my usual genre, but this one is set in an interesting time period, in the clans of ninth century Ireland battling Viking invaders. And as the title suggests, it features a strong female lead. A kickass 9th century heroine, if you will. Gotta love it!

Because of the unusual time setting, the author includes a brief forward to set the stage, showing that she did her research and strives for authenticity. According to Kelly, "Although Ireland was a male-dominated society, women were allowed greater freedom, independence and property rights than other European societies of the time."

Against this backdrop we meet Fianna Byrne, the queen of her clan and former wife to neighboring king, Connell O'Neill. They have a son together, who is being fostered elsewhere as was the custom. When Fianna's village is attacked and devastated by Viking raiders, she fights until left for dead. Upon waking, her first thought is of her son, and the need to warn neighboring clans of the invaders. Despite the ill feelings between her and Connell, he is the father of her child and deserves the chance her village never got.

Connell O'Neill has complicated feelings for his ex-wife, despite asking for the divorce and spreading nasty lies about her character. His main problem being that he never stopped loving her.

Told in alternating points of view, the reader can sympathize with both sides of their complicated relationship, and the fact that there are two separate clans now depending on this couple to figure out a path to survival for them all. The author adds in lots of little historic details which drew me into the story, as well as keeping the action moving forward at a fast clip. The story is a long novella in length, which I read in one sitting and enjoyed immensely.

If you like authenticity in your historic romance, and maybe something a little different than a Victorian or Edwardian setting, I can whole heartedly recommend A Woman of Courage by Marlow Kelly. 5 stars for sure!

Buy it on AMAZON
Posted by Katie O'Sullivan at 5:00 AM