Friday Feature: The Darker Side of Mermaid Life 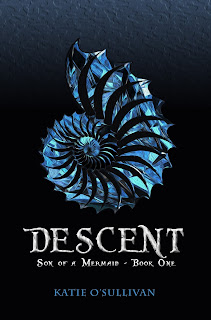 You might be thinking, “What could be so dark about mermaids?”

And while you are asking this question, most of you are picturing the Disney version of Ariel in your mind. Sweet, innocent, cartoon-ishly benign. Go ahead, admit it. She is the most famous mermaid of our times. 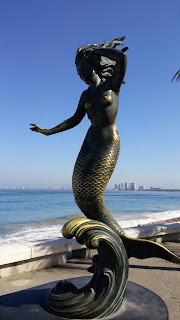 But mermaids and sea creatures aren’t so one-dimensional. After all, remember the sea witch, Ursula?


In one popular Greek legend, the gods turn Alexander the Great’s sister into a mermaid. She lives in the Aegean Sea and when she encounters a ship she asks its sailors only one question: "Is King Alexander alive?" The proper answer is yes, saying "He lives and reigns and conquers the world." Placated, the mermaid calms the waters and wishes the ship farewell. Any other answer spurs her into a rage where she summons a storm, dooming the ship and its sailors.

The main character of my Son of a Mermaid YA series is fifteen-year-old Shea MacNamara. He grew up in Oklahoma far away from any oceans, never thinking about mermaids. Raised by his emotionally distant father, he never knew the mom who left when he was a baby. Since Dad never even mentioned her, Shea figured it had been a surprise pregnancy, and that his dad had gotten “stuck” raising the unwanted child.

He meets a mysterious girl along the shores of the Atlantic – a girl with secrets, and who knows secrets about Shea as well. The girl introduces him to an undersea world he never knew existed, and suddenly all the odd abilities he’s developed over the years make total sense. He also discovers that not all mermaids are beautiful and sweet, and that bullies and evil exist everywhere.

Descent: Son of a Mermaid~Book One tells the story of Shea’s introduction to this undersea world, where he meets Prince Demyan, a ruthless merman from another clan who is trying to take over the Atlantic Ocean. In the second book of the series, Defiance, Prince Demyan seeks revenge on Shea for spoiling his evil plans.


Just as people come in all shades of good and evil, so should merfolk. It makes life under the sea that much more intriguing!

Grab copies of DESCENT and DEFIANCE on AMAZON - or ask for them at your local bookstore.
Posted by Katie O'Sullivan at 6:00 AM