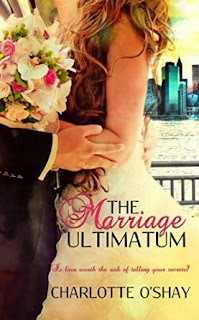 The Marriage Ultimatum, by Charlotte O'Shay
Published June 2016 by The Wild Rose Press


Dead-end job? Dreary apartment? Disastrous love life? Check, check, and check. Toddler who makes it all worthwhile? Absolutely. Juggling work, college, and the care of young Alex was never Sabrina's plan.
But Sabrina's dreams are bigger than any curve ball life can throw at her. Her top priority is keeping her small family together, no matter what the cost.

I absolutely love the cover of this author's debut romance! And the story, while it has a few quirks, is sassy, fast-paced and truly fun to read.

The tag line on the cover reads "is love worth the risk of telling your secrets," and these main characters have a few whopper secrets they're not only keeping from each other, but trying to hide from the world. The story may be flawed in places, like its characters, but the first thing I wanted to do when I finished was to start over again from the beginning and live through it all a second time.

Life has not been easy for Sabrina Boyd. Her dad took off when she was small, leaving her single mom to struggle in poverty and through a series of failed relationships. When it seemed her mother had finally turned the corner, with a steady job and steady guy, she got pregnant. After the baby was born, a tragic accident left Sabrina alone with an infant to care for.  Not wanting to lose her only remaining family to DSS, Sabrina dropped out of college to raise her baby brother as if he were her own.

Vladimir Grigory might be a billionaire, but he started life as an orphan on the docks of St. Petersburg, his younger brother clinging to him. He escaped that fate by going to sea on a merchant ship, and later made his fortune in the U.S. shipping industry. In all that time, he never forgot his lonely origins and vowed to make life better for Russia's other abandoned children.

So when tabloid stories and photos surface accusing Vlad of fathering - and abandoning - Sabrina's child, he understandably goes a bit ballistic and overreacts. Sabrina is caught up in the whirlwind, and even though she is a strong, independent woman, she gets totally sucked along in Vlad's plan, his seduction, and his marriage ultimatum. But what happens when her secret gets out? And how will Vlad keep his own childhood secret as Sabrina grows closer to his heart?

As I said, the story has a few quirks, but all in all was well written, well told, and  thoroughly enjoyable. Totally recommend for a fast paced, absorbing beach read, filled with both heart and sizzle. I'm looking forward to reading more from this author.