Writing Wednesday: The Dark Side of Controlling your Characters


You get to a point when you’re reading a book when you understood all the characters. Who’s the hero, who’s the heroine, who are the bad guys… You’ve got them figured out. Then someone goes and does something you totally didn’t expect. That completely changes your perception of them.

That happens to authors too.

At least, it happens to me.

In the second book of my Son of a Mermaid series, one of the key characters is the sorcerer Zan. We met him a few times in Descent, the first book, as the sidekick to Prince Demyan. He’s part of the inner circle of evil guys trying to overthrow the Atlantic kingdom, and we see the deadly consequences of his magick. The tornado that destroys Shea’s home in Oklahoma. The storm that kills Shea’s grandfather and uncle. The poison that makes its way into food at the Solstice banquet.

Prince Demyan may have given all those orders, but Zan followed through with their execution.

In Defiance, Book Two of Son of a Mermaid, we meet Zan right from the get-go, with the first chapter in his point of view. We find out that even though the rebellion failed, he’s still in league with the evil prince and signing up for more dirty work.

When I started writing Zan, he was pretty one-dimensional. A bad guy.

Originally, Zan was only going to narrate a few chapters, like he did in the first book, to give the reader insight into what the bad guys were up to. But as I was writing subsequent chapters, Zan’s voice kept popping up, asking me – begging me – to let him tell the scene from his perspective.
I decided to let him have a voice. And he surprised me!

Something happened to him when he went to kidnap Kae. Giving him one of the point-of-view voices let him show me what was going on inside of his head, and gave voice to his inner doubts.

Bad guys aren’t supposed to have doubts. But Zan did. He wanted to be better, to be worthy of a mermaid like Kae.

By the end of the book, he’d redeemed himself in my eyes. Even though he was originally going to die – yes, really, I planned to kill him off – I didn’t want to punish him at all. He’d done terrible things under orders from Prince Demyan, but I convinced Shea to let him off the hook… except a full pardon didn’t sit well with beta readers or with my editor.

Zan’s character at the end of the book is not who I thought he was going to be. I gave up trying to control him and I like the way he grew up.

What do you think of characters who change and grow into something different? Or do you prefer to read characters who are black and white, with no grey wiggle-room for redemption? 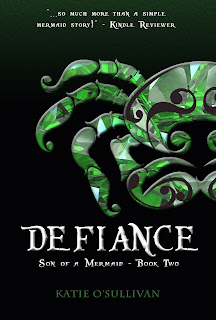 Shea MacNamara sank to the bottom of the ocean and survived. As the son of a mermaid, saltwater is in his blood. He discovered a whole new world under the sea, one more beautiful and complicated than he ever imagined.

But shadows and dark secrets also lurk beneath the waves.

All three face life and death decisions, balanced precariously between doing what they are told… and defying authority to do what is right.


Grab your copy on AMAZON or ask for it at your local booktore.

Email ThisBlogThis!Share to TwitterShare to FacebookShare to Pinterest
Labels: #amwriting, #mermaids, #WritingWednesday, #YA, Defiance, SON OF A MERMAID