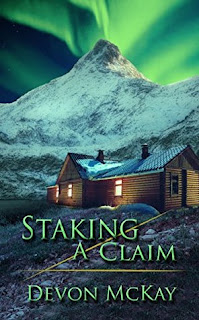 Staking a Claim, by Devon McKayPublished 2015 by The Wild Rose Press


For most people, seeing Alaska is a dream come true. For Miami Beach resident, Samantha Held, it is merely a job assignment. An advertisement for vacationing in Alaska is one step closer to achieving her career goal, partnership in Kolinsky’s Advertising Agency. As far as accepting the offer of assistance from Blake Langford, a hunky Fish and Game officer and local rancher, though it is offered in a sour manner, she wasn't about to look a gift horse in the mouth.

Determined to sabotage Sam’s goal in every way, Blake isn’t willing to accept any exploitation of his beloved state, no matter how desirable the striking, southern blonde bombshell with fiery green eyes. Falling in love with the enemy was never part of the plan.

Having previously devoured Devon McKay's earlier novel, Cowboy on the Run, I thought I knew what to expect from this one. Nope. This book was different in many ways, not least of which there weren't any cowboys. And it's set amidst Alaska's breathtaking wilderness.

Samantha Held is a Miami advertising maven, sent to Alaska on the assignment of her career. If she can create the brochure that wins the client, she will also win the coveted partnership she's been craving. Getting lost in her rental car upon arrival doesn't bode well for her prospects of winning much of anything.

When she runs into Fish and Wildlife officer Blake "Wolf" Langford, she's not sure if her luck has turned for better or worse. One minute he's charming and helpful and the next he's snapping at her and blaming her for bringing more tourists to ravage his state. Although he totally runs hot and cold on her, all she can think about is ravaging his body... Which, as an aside, doesn't say much for those guys back in Florida if she has to travel to the other side of the U.S. to finally find a guy who stokes her fire.

It's completely obvious that the author knows -- really knows -- the landscape she describes in such loving detail, from the dense underbrush and flowing streams, to spending a late night in a natural hot spring while watching the Northern Lights dance overhead.  The natural beauty of the rough wilderness is like the third main character in the book, the one that keeps throwing twists into the plot and wrenches into the works to keep the main characters apart... Or at least out of bed.

Blake is fiercely protective of the untamed beauty, and Sam very quickly comes to appreciate why a generic tourist brochure won't do anyone justice, least of all the state of Alaska. The story left me longing to visit the state for myself after experiencing it through Sam's eyes.

The book started slow for me, but that could have been my own misconceptions of what to expect. The other small problem I had was that there wasn't a lot of difference in tone between the two alternating POVs of the main characters. At times I lost track of whose POV I was privy to, since they sounded alike.

All in all, an enjoyable read with a satisfying HEA... and like a mini-vacation to an exotic location.

Grab a copy on AMAZON
Posted by Katie O'Sullivan at 6:47 AM