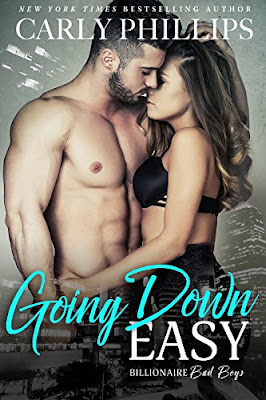 Alpha-licious in the most unexpected ways, Kaden Barnes always gets what he wants.

Enigmatic and exacting, he's unable to keep an assistant for long. Until Lexie Parker arrives. She's no-nonsense, efficient and all business… She’s also hot as sin and soon starring in Kaden's dirtiest fantasies.

When their passion for each other reaches a boiling point, Kaden may think he’s calling the shots, but for this billionaire bad boy, going down easy has never felt so good.

Carly Phillips is a master at sexy, steamy contemporary romance, writing series after series of alpha males and the strong women who love them, tantalizing readers for over a decade. I've been reading her books for years, and she is one prolific writer, with over 50 contemporary romances to her credit as well as the monikers of both USA Today and NYT Bestselling author. After starting her career being traditionally published, she made the leap to indie pubbing her own work, which means she's able to put out many more books each year and keep her price points low.

While some of her books are more sex than storyline, this was a really great read, with a strong heroine whose largest problem is not an ex but a bipolar twin sister - talk about a unique twist! Going Down Easy is the first of a 4-book series set in the high tech world, with corporate espionage mixed in with the sizzling sex scenes. Unlike many of her other book series (The Wild Boys, The Dare Boys) these are not intertwined stories of brothers from a big family but rather four college friends who came up with an idea and worked hard to bring it to fruition and hit the big time.

Kaden Barnes and his three best friends came up with a killer app that "changed the face of social media" and are about to take their company public, but there are complications. Kaden may be a tech genius, but he's also demanding and hard to work for, hiding his anxiety and ADHD behind a gruff exterior and scaring away his last three PAs.

Lexie really needs this job, having lost her last few because of her sister's mental health issues, and having gotten this one because her dad is one of the company's financial investors. She's not about to let Kaden run her off with his bossy behavior and exacting demands about how hot his coffee should be or how his desk should be properly arranged, or how many slices of avocado should be on his sandwich. She's well versed in caring for those with mental health issues, with a depressed mother and bi-polar twin, and realizes her new boss has issues but is able to work with and around those issues, surprising the hell out of Kaden.

Things heat up quickly, as they often do in a romance novel, but it never feels forced or untrue. As I said at the beginning, Carly Phillips is a master of this genre. Well paced, well plotted and steamy as hell, this is a satisfying contemporary romance with just enough intrigue in the plot to keep the pages turning fast.