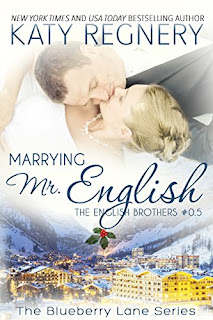 
Trust fund playboy, Tom English, was supposed to find a "good woman" and marry her by midnight on his 32nd birthday. If he didn't, his grandfather promised to disinherit him. Unfortunately for Tom, three days before he was set to get married in Vail, his fiance elopes with her skiing instructor leaving Tom high and dry. With only a week before his birthday, it looks like Tom will forfeit his millions.

When Eleanora Watters, a smart, sassy - totally broke - waitress, spies down-on-his-luck Tom English in the breakfast-all-day diner where she works, she doesn't think much of him. He's at least ten years older than she is and he looks like another trust fund jerk with a silver spoon shoved up his...a-hem. But Tom surprises her. Set up on a blind date by Eleanora's cousin, the two bond over books, and after spending just a few hours together, Eleanora offers to marry Tom in order to help him secure his fortune.

After a whirlwind marriage in Las Vegas, Tom and Eleanora begin to realize that they're not as unlikely a match as they once seemed, and their feelings for each other deepen. But when Tom's grandfather sees through their scheme and threatens to cut them off, Tom will have to decide if he wants the money more than the Colorado waitress who seems to be something between "a dream and a miracle."

This full-length, standalone prequel can be read before OR after the six English Brothers novels!

This was my first official Christmas read of the season and it gets two thumbs way up. I have to say I enjoyed every minute of it, and while it wasn't over-the-top filled with Christmas spirit, the sweetness and love and genuine affection made it a totally fun read.

I first discovered Katy Regnery's English Brothers series a while ago, reading and reviewing Book One of the English Brothers series, BREAKING UP WITH BARRETT - you can find my review HERE on my blog. When I saw her name pop up again on my list I remembered liking her writing, but I didn't quite remember why. I shrugged it off and dove into MARRYING MR. ENGLISH, finishing it up in a few hours and going right back into my Kindle archives to find the first book to re-read. Yes, I like it that much. (and Yes, I should have been writing at the time.)

Light and breezy writing combines with strong-minded yet slightly quirky characters to give a satisfyingly real story of love and compassion. Third person POVs that shift between the main characters give us insight into how they think and feel, and how those emotions evolve throughout the course of the story. I like that Regnery's women all speak their minds and are honest about who they are. I really like that her men are all both strong and vulnerable at the same time, able to listen, learn and grow without seeming any less of a man. They may not be Navy Seals, but they are truly swoon-worthy hunks.

The stories don't have "big drama" but are more social dramas, the kind that fans of Jane Austen and Downton Abbey will totally appreciate. Don't get me wrong, these are not period dramas or old-fashioned tales, but rather a modern take on an age old story that will keep you turning pages faster than you realize even without any blood or guns or Navy Seals or vampires.

This Christmas book starts out in Colorado, giving us the untold back-story of when the parents of the English Brothers first met. And given the way the rest of the series plays out, the mother's origin story is both unexpected and heartwarming (perfect for Christmas, right?) The device is that this is all in the past, interspersed with chapters set in present-day, on Christmas Eve, where Eleanora is telling the story out loud to her daughters-in-law as they decorate the Christmas tree.

Grab a copy of this heartwarming story on AMAZON.