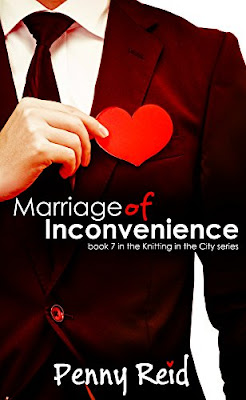 Marriage of Inconvenience, (Knitting in the City Book 7)
by Penny Reid
Published March 2018 by Caped Publishing

There are three things you need to know about Kat Tanner (aka Kathleen Tyson. . . and yes, she is *that* Kathleen Tyson): 1) She’s determined to make good decisions, 2) She must get married ASAP, and 3) She knows how to knit.

Being a billionaire heiress isn’t all it’s cracked up to be. In fact, it sucks. Determined to live a quiet life, Kat Tanner changed her identity years ago and eschewed her family’s legacy. But now, Kat’s silver spoon past has finally caught up with her, and so have her youthful mistakes. To avoid imminent disaster, she must marry immediately; it is essential that the person she chooses have no romantic feelings for her whatsoever and be completely trustworthy.

Fortunately, she knows exactly who to ask. Dan O’Malley checks all the boxes: single, romantically indifferent to her, completely trustworthy. Sure, she might have a wee little crush on Dan the Security Man, but with clear rules, expectations, and a legally binding contract, Kat is certain she can make it through this debacle with her sanity—and heart—all in one piece.

Except, what happens when Dan O’Malley isn’t as indifferent—or as trustworthy—as she thought?

My Take:
If you've never read a Penny Reid book, you have no idea what you're missing! Her latest book, Marriage of Inconvenience, released last week, appearing like a late Christmas present in my Kindle library. Don't you love when you forget you preordered something you really-really-really want to read?

This series is filled with smart, unique characters that you can't help falling in love with. Each couple has their individual problems and quirks that aren't really apparent until it's their turn in the spotlight. As this seems to be the last book in this series, each of the other six women in the Tuesday night knitting group has already paired up with their unlikely - but perfect for them - mate, and the rest of the couples are there to help the last woman find her Happily Ever After.

But it's more than that, as the various standalone books weave in and out of each others timelines, something I've been trying to do with my own writing so its fascinating to see it done by an expert. And have no doubts. Penny Reid is an expert. Her books keep getting better and better.

Yes, each of the novels truly is a standalone, and you can start anywhere and understand all the characters and be totally satisfied by the storyline, because each story gives you the perspective of the lead couple, a he said/she said first person POVs that show you what they think of all of their friends. Which is cool. But for the full immersion experience, start at the beginning, with Neanderthal Seeks Human and work your way through them all.

Back to reviewing this actual book.

As Penny Reid wraps up her Knitting in the City series, she proves once again how she is the master of writing smart, quirky romance. Marriage of Inconvenience gives us main characters who appear smart and capable to everyone around them, while their insides are roiled with self doubt and frustrations.

Kat Tanner is the heiress to a multi-billion dollar Boston pharmaceutical empire, hiding behind a fake name while living, working and attending college in Chicago. She met Janie at the architectural firm where they both worked, until Janie was fired but that's another story (literally), and Janie introduced her to the Tuesday night knitting group. Unfortunately, her time is running out as her cousin is determined to take over her father's corporation, and the quickest solution is to have Kat committed to a mental institution. Yeah, it makes more sense when you read the story.

Dan O'Malley is partners with Janie's husband Quinn in their high end security company, but he also came from Boston roots, just not of the billionaire variety. He's had a crush on Kat for more than two years buthasn't acted on his feelings because, well, she's just too good for him because he knows about her past and she has no clue that Dan spent time in prison, or that his brother runs a gang he was once part of. And, oh yeah, that one night in Las Vegas (Book 2? Book 3?) they had a bit of a misunderstanding.

Kat needs to get married, like a month ago, to keep her safe from her cousin's evil intent. She asks Dan, sure he has no actual feelings for her. But then finds out he does. And things get complicated, like all Penny Reid books tend to do. Deliciously, messily complicated.

Told in alternating first person POVs, Dan's chapters are hysterically coarse and blunt, so if the "F" bomb offends you, this isn't the book for you. However... The twists and turns and witty dialogue kept me turning pages all day long - yes, I was supposed to be working, but I kept stealing time to read pages here and there and once it was after 5 p.m., I didn't stop reading until I was finished. And smiling. So maybe don't start reading until you have a whole day to savor this. But definitely read it.