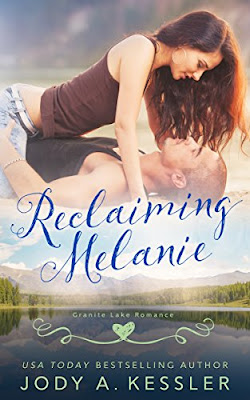 
Single mom Melanie Jamison doesn't have time for half-naked rescues from Granite Lake by her first love, Braden Keehn — the boy who mysteriously disappeared from her life a decade earlier. Coaching, repurposing furniture, and taking care of her daughter who has severe allergies have her swamped.

But there's one gargantuan problem with this second chance romance - the sexy alpha game warden doesn't seem to remember her.

Special Ops Game Warden Braden Keehn’s recent drug investigation leaves him ambushed in the forest and lucky to escape alive. Helping his brother fix and flip an investment property in Granite Lake is just what the doctor ordered for a quiet recuperation.

But there’s one mammoth-sized surprise — Melanie, the girl he loved and lost, lives in the house next door... and he can’t tell her anything about why he’s returned.

Reuniting with Melanie — and falling in love again is easy — but gaining her trust and finding their happy ever after brings frustrating, steamy, and sometimes hilarious challenges Braden never saw coming.

Reclaiming Melanie is a stand-alone novel with a happy ever after.

The third book in Jody Kessler's Granite Lake romance series, Reclaiming Melanie gives us a second chance romance mixed with an introspective journey of self discovery. Ms. Kessler's lyrical writing style lends itself to interior monologues plagued with second thoughts and self doubt, as her two main characters weave an intricate dance around each other, their shared past, and the sizzling chemistry they both try so hard to deny.

Melanie Jamison is a divorced mom of a preteen, and the story begins with her driving the daughter to the airport to spend the summer with her father and his new wife. Married at nineteen, this summer will be Melanie's first time actually living alone, and she plans to use the summer for introspection and finding herself. At least, when she's not worrying herself into a frenzy about her daughter's health and well-being. Her entire focus has been on being "Mom" for so long, she's forgotten how to be herself.

Enter Braden Keehn, her high school boyfriend and "one true love" (so, not the guy she married and had a kid with) who left town without saying goodbye more than a decade before, shattering her heart.  Now he's the new owner of the house next door, but at first doesn't seem to even remember who Melanie is.

Things in Granite Lake are not always as they seem.

The story unfolds mostly from Melanie's perspective, with chapters mixed in from Braden's point of view, as he also struggles with figuring out what he wants from life and finding purpose now that his latest and most difficult case is finally coming to a conclusion.

This is not a fast read. Take the time to savor the writing, and the contrasts between the various characters and the ways they speak and act. Ms. Kessler does a wonderful job of capturing a mother's angst, as well as the sense of needing to rediscover your own purpose once the kids have grown.

Grab a copy on AMAZON
Posted by Katie O'Sullivan at 6:38 AM