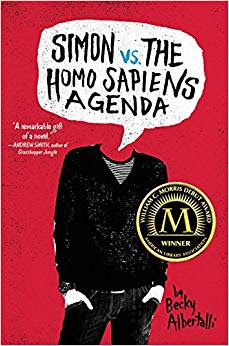 Sixteen-year-old and not-so-openly gay Simon Spier prefers to save his drama for the school musical. But when an email falls into the wrong hands, his secret is at risk of being thrust into the spotlight. Now change-averse Simon has to find a way to step out of his comfort zone before he's pushed out—without alienating his friends, compromising himself, or fumbling a shot at happiness with the most confusing, adorable guy he's never met.

Incredibly funny and poignant, this twenty-first-century coming-of-age, coming out story—wrapped in a geek romance—is a knockout of a debut novel by Becky Albertalli.

Last week we had a blizzard and spent a week with no power. Okay, it was two days and nights, but it felt like a week. It was cold. My Kindle died. Our computers died. There was no television. My youngest child and I were here alone with candles and books. So we read. This was one of the books we both read. Him first, and then he basically stood in front of me shoving it into my hands until I agreed to read it too.

I wish I'd written this poignant, funny, sarcastic and emotion-tugging coming of age novel. Because, really. It's a great book. Even though it doesn't fit any of my normal reading patterns as well as pushing a few of my "don't do that!" buttons.

My son had the same issue the first time he tried to read it - alternate chapters are email conversations between the lead character, Simon, and another boy, although they each use pseudonyms online. The other chapters are first person from Simon's point of view. My son put it away last time he tried because of the email chapters, and I have to agree that I might have done so as well if not for his recommendation. He went back and tried again because of the movie which just came out last week, as well as because of the recommendation from a trusted friend.

So if you're reading my book reviews, I'll play the part of the trusted friend. Get over the email chapters. Actually, they hold some of the most insightful and enlightened prose in the book. It's actually pretty awesome watching the relationship develop between the two characters through their anonymous online interactions.

Let's put it out there right up front: the book is different than the movie. They changed some of the characters, did away with a few of the characters altogether, and changed some of the subplots, all in the name of creative license and selling movie tickets. Or some of the changes are likely because of the shortened time slot and attention span of movies versus books. I haven't actually seen the movie yet, I know these facts from both the trailers and from my two children who went to see the movie opening night. (and my youngest went back again on Saturday for the matinee. It's a good movie. But the book is better. A lot better.)

And we're here to review the book.

Simon is an average teenager, in his junior year of high school. He's figured out that he's gay, but he's not sure what to do about it. As in, he hasn't even told his two best friends, let alone his parents. He lives in Georgia, outside of Atlanta, not exactly a bastion of liberal tolerance. Another boy posts anonymously online about being gay and feeling alone, and Simon writes back, which begins an online back and forth, kind of flirting, kind of getting to know each other.

And then another boy finds the emails and blackmails Simon. I'm not giving anything big away here, this is all revealed in the first few pages.

How Simon deals with all of this is the story.

And it's a good, real, gritty, funny story. With characters that feel like real high school kids. The author does an excellent job of not succumbing to stereotypes of any sort - the author is almost color blind in the way she describes her characters, and blends the soccer players and the drama kids in a way that, while we're only seeing from one kid's point of view, makes it all seem pretty real. As our lead narrator, Simon is a normal, self-absorbed sixteen year old, who only comes to realize his own self-absorption as he becomes more self-aware. Yeah, it's pretty cool.

Okay, perhaps I'm not selling this as well as I could, but I totally want you to go try this for yourself. Get over the hump of that first chapter filled with back and forth emails, and keep reading.

Grab a Kindle copy on AMAZON.