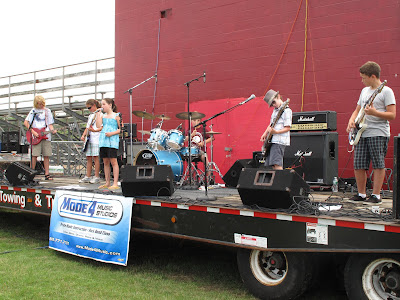 For those who don't know, my 12-year-old is in a Rock Band. Their name is NonCompliant, and he's the oldest kid in the band. My son's been taking guitar lessons at Mode4Music since he turned 8, and the band first formed when he was 9.

For the last three summers, NonCompliant has been playing one of the band sets at Barnstable Kids Day, a free day of fun sponsored by the Barnstable Police and Fire Departments and held at Barnstable High School. This year, they were the only band to play, and performed both sets themselves. 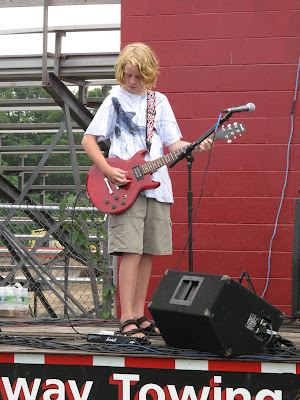 It was a steamy, muggy hot Saturday. The studio director and roadie dads were there at 7 a.m. to haul the equipment. The band members started arriving at 9 a.m. for the sound check. The gates opened at quarter after 10, following the parade of fire and rescue vehicles onto the field. The sun blazed through the fog just as people started streaming through the gates.

By 11 a.m. when the band was introduced by Suzanne from Dunes 102 radio, it was sunny and sweltering on the field. It was hot.

My son's solo (in IronMan) didn't go well. He pulled through it, and finished the rest of the set, but didn't smile again. Luckily, they had an hour between sets to cool down, have some of the free ice cream, watch the K-9 unit demonstrations and try to dunk the police officer in the dunk tank.

Despite the heat, the second set rocked. Everyone on the field was bouncing along to the Blitzkreig Bop, and my son nailed his solo on Smoke on the Water. The 6 band members and their teacher, Tony, were all smiles when they got off stage to sign autographs. 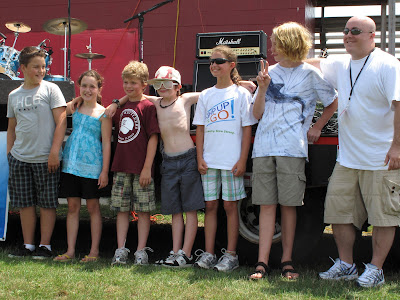 And then the real fun of the day. The biggest draw at Kids Day is not the band, or the Jaws of Life, or the cute puppy members of the K-9 unit. It's the Foam Blower. The firemen hook up the hoses and blow gallons of foam using the airport blower unit for the kids to romp in. 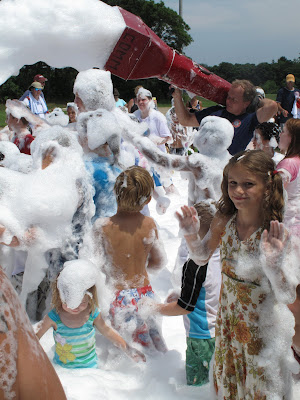 And then to clean off the foam, a giant fire hose is attached to one of the ladder trucks to create a gigantic shower for all to wash off under. 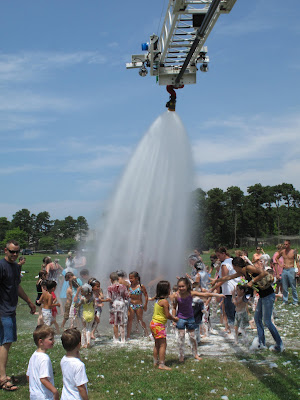 It was a great way to end a hot and sweaty day. A great time was had by all, band members and new fans alike.
Posted by Katie O'Sullivan at 6:54 AM