Today I'm turning over the reigns to another fellow author, Cindy Young Turner, author of Thief of Hope. She's talking about Banned Books, and her own favorite from her childhood - THE OUTSIDERS, by S.E. Hinton. 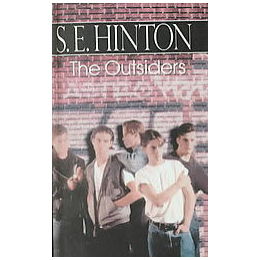 There are a number of books on the banned books like that I’d consider favorites. One of the most memorable was The Outsiders by S.E. Hinton. I think I was in middle school when I read it and I got it from one of the Scholastic book clubs. Those things were great. I was probably one of the only kids who ordered books like All Quiet on the Western Front and some book about a nuclear holocaust. Nothing but light reading for me!

That’s why I loved The Outsiders so much. It felt so real and it was so different from what I was used to as a kid growing up in a quiet suburb of Massachusetts. The Outsiders had tough kids trying to make it on their own, but mostly it was about loyalty and friendship and family. It was easy to relate to Ponyboy and his struggles, and I loved his interest in writing because I was also a young writer. It’s one of the first books I remember making me cry, and if you’ve read the book, you know why I did.

The Outsiders has been banned because of its realistic portrayal of ‘60s gang violence and family dysfunction (per Wikipedia), plus teen smoking and drinking. These days a book like that seems tame. YA is a lot edgier now (how many people died hideous deaths over the course of the Hunger Games trilogy?) and authors are often pushing the boundaries. But these are problems kids deal with on a regular basis. We all want to read books that reflect our experiences and the world around us. Violence and gangs are still an issue, dysfunctional families are still an issue. You can’t sugarcoat the world because kids will see right through it.

I’m happy to say that my parents never censored my reading when I was young. The library was a magical place where I spent a lot of time. I remember the children’s/YA section was an entire floor. My mom would go upstairs to the adult section and I’d have free reign of the basement floor. In looking over the list of banned books, I’ve read quite a few of them. I hope to instill the same love of reading and curiosity and open-mindedness in my own daughter. And when she’s old enough, I’ll happily share my paperback copy of The Outsiders with her.

Cindy's book, Thief of Hope, is available online at Amazon and Barnes and Noble. 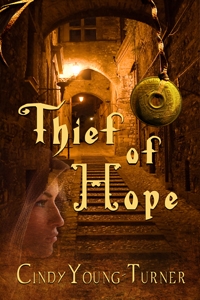 Sydney, a street urchin and pickpocket in the town of Last Hope, has managed to evade the oppressive Guild for years, but there is no escaping fate when she's sentenced to death for associating with the resistance. After she's rescued by a wizard, Sydney is forced to accept that magic-long outlawed throughout the Kingdom of Thanumor-still exists, and the Tuatha, a powerful faery folk, are much more than ancient myth and legend. When the wizard offers a chance to fight the Guild and bring Willem, bastard prince and champion of the Tuatha, to the throne, Sydney embraces the cause as a way to find her own redemption. But Sydney's fear of the Guild, distrust of authority, and surprising connection to the Tuatha threaten Willem's success. Can she untangle the strange threads that entwine her life not only to the fate of the kingdom, but also to Willem himself?

About the Author:
Cindy has always been an avid reader and became fascinated by mythology and Arthurian legends at a young age. She quickly decided she enjoyed creating her own worlds and characters and set to work writing her own stories. She won her first writing contest at age twelve, a short story inspired by the style of Edgar Allan Poe. Branching her interests from mythology to classic supernatural tales to medieval history and then to fantasy seemed to be a logical progression. Her fantasy novel, Thief of Hope, was published in 2011.
A native New Englander, Cindy currently lives in the Mid-Atlantic region with her family and each year wishes for more snow. Visit her at her website at www.cindyyoungturner.com
Posted by Katie O'Sullivan at 5:00 AM