Today, I'm turning over my blog to an old college friend, Wendy Barry, who sat through more English literature classes with me than I care to remember. We read novels and poetry, philosophy and political treatises. After Colgate, I moved to Boston and dabbled in the advertising world, while she made better use of her English degree and went on to Vanderbuilt to obtain her Masters.

Wendy now lives down South with her wonderful husband, talented son, and uber-spoiled dogs, and teaches English for a living. She also writes fabulous poetry for fun, and I swear that one of these days I'll make it to one of her live poetry readings! Promise!

And without further ado, I'll turn over the blog to Wendy... 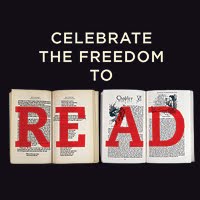 Over the years, there have been a lot of books banned in a lot of places. Before there were even papyrus rolls, there were scribes rubbing out the good parts with hammer and chisel. Of course, what constitutes the good parts or the scary parts or the incendiary parts changes over time and place. When the Pharaoh Akhenaton was in charge, he made the kingdom of Egypt a monotheistic nation. Most Egyptians did not like that, so after his death, they got rid of all the hieroglyphics referring to Ahkenaton’s reign and blasphemous single-god craziness.

It’s funny how what is unacceptable changes, isn’t it?

I teach English and composition at an open door institution in one of the most educationally backwards states in the nation. Many of my students, many more than you would like to believe, struggle with reading. They don’t want to read, they avoid reading at all costs, and I sometimes have them read out loud, they falter and halt over three syllable words, like syllable, for instance.

Last year, at a local high school, one of the books on the summer reading list was challenged. The book in question apparently had bad words and described some bad behavior in it. A few parents judged it as an inappropriate choice for all students, which seems unfair.

The bad words, in particular, are what concern me. What are these bad words, anyway? Are they words that run amok and shoot up a movie theater? Are these words scalding newborns? Do they light puppies on fire?

No, they don’t, because words are not inherently bad, nor good, but tools for us all to communicate the good, the bad, and the ugly of human experience. Sure they are sometimes sharp tools, and people can be cut by them, but they are our tools, the most important in an ongoing battle to retain our humanity.

What of my students, and they are many, who not only don’t read well, but are not allowed the words that come closest to expressing their experience? What about the victims of child abuse, domestic violence, dysfunctional families, poverty and lack of education, who are not allowed to say how ****ed up that is?

Here are my suggestions: