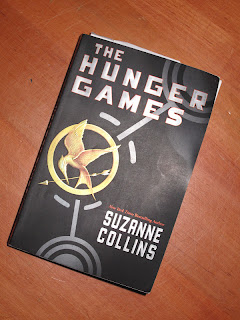 I guess I wasn't totally surprised to find THE HUNGER GAMES by Suzanne Collins on the list of Top 10 Banned Books for last year. Even though the book was first published in 2008 (and assigned as summer reading for incoming freshmen to Harwich High School in 2010) it didn't receive the close attention of parents until the movie and the associated hype exploded last year.

I was one of the first readers to check this book out of my local library in January 2009 - and then had to wait until September for CATCHING FIRE to be released! And then wait again for MOCKINGJAY. (The agony!) It seems crazy to me that people would want to ban such engaging works of literature, books that make you think outside the box, beyond your current life.

The original Publisher's Weekly review compared the book to Aldous Huxley's BRAVE NEW WORLD, another favorite of book banners, but that's aimed at adults. Parents object to THE HUNGER GAMES being targeted at children.

I explained Banned Book Week to my twelve year old, and explained that some parents wanted to take THE HUNGER GAMES out of schools and local libraries. That some parents didn't feel the book was appropriate for children. Here's what she wrote in response - all in her own words:

I believe that The Hunger Games should not be banned from book stores and libraries. The main character, Katniss, is trying to protect her family from starvation, and ends up saving her sister from being thrown into the arena.

Parents can tell their children what not to read, by not letting the book into their home, but taking it from libraries and book stores is like having jurisdiction over what other peoples’ children can and cannot read.

The whole series is about family, teamwork, and love. It is an inspirational, message to young readers that they can accomplish the greatest tasks. The Hunger Games is a great, well written book that is an experience that readers should not be deprived of.

Today my daughter and I are re-reading our favorite parts of the trilogy in honor of Banned Book Week. What are you reading?