Frankenstorm is on its way... 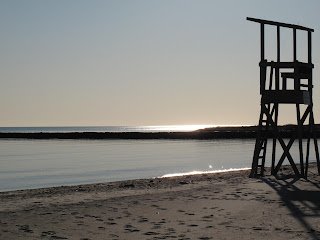 Looking out at the calm ocean this morning, it's hard to believe that a giant storm is on its way, barreling toward the East Coast as I type. The local media has nicknamed it "Frankenstorm" as it's about to screw up everyone's Halloween plans.

That's a new thing - the weather service has decided to start officially naming storms so it's easier to hash tag them. But that system hasn't gone into effect yet, so we're still getting the fun, made-up names, like last year's "Snowtober" storm. And now, Frankenstorm. Go ahead, say it. It's fun to say.

Part of me wants to ignore it because it most likely won't mean a thing to us. Last year the schools sent the kids home early one day - before lunch early - because we were supposed to get a big storm. Nothing.

This time my husband even went looking for a generator. We already discussed the pros and cons of different types of water bottles we can stock up with (two of the large poland springs box jugs sprung leaks last time we stocked up.) I need to move the outdoor furniture around so it won't hit any windows.

I guess I haven't lived through a "real" coastal storm yet. I've been lucky in my years on the Cape. The insurance company keeps telling us that when they raise the rates in preparation for The Big One. I remain skeptical of just how bad a storm could be around here. I mean, it's not Haiti. It's Cape Cod.

And then I look at my sister's experience last year in Killington, another upscale resort community. Her house made it through unscathed, but her road was washed away. As were many of her friends homes, cars and possessions. And the Woodstock Inn (where she works) took forever to recover from the flooding and the mud damage. The state of Vermont is still in the process of recovering, more than a year later.

So maybe I will move the patio furniture, and bring the pumpkins inside. And keep my fingers crossed that the storm goes out to sea instead of crashing on my shore.

Although it does have a cool name.

How about you - Do you live on the East Coast? Are you ready for Frankenstorm?
Posted by Katie O'Sullivan at 8:10 AM