This month, I joined the Cephalopod Coffeehouse Book Club, hosted by The Armchair Squid. (Yes, yes, perfect for the mermaid author, right?) The website explains:

"The idea is simple: on the last Friday of each month, post about the best book you've finished over the past month while visiting other bloggers doing the same.  In this way, we'll all have the opportunity to share our thoughts with other enthusiastic readers."

Well, I generally read a lot - lots of ARC by new authors, beta reads, as well as any YA or MG that grabs my attention or is thrust into my hands by one of my kids. I also read, you know, adult fiction that tends toward romantic suspense, women's fiction, fantasy and "chic lit." Okay, so eclectic tastes, just warning you.

Unfortunately, I've read an awful lot of bad books this month, and several mediocre ones to boot... so this is harder than I thought it was going to be.

One of the better ARCs I read this month doesn't release until November 5th, and I promised to hold my review until then. (Hint: Check out DROWNING by Rachel Firasek on Goodreads.)

And my favorite book I read this month was the middle grade time travel WHEN YOU REACH ME by Rebecca Stead, which I already reviewed HERE.

Which leaves me with... a Contemporary Romance titled WAKING UP MARRIED by Mira Lyn Kelly. 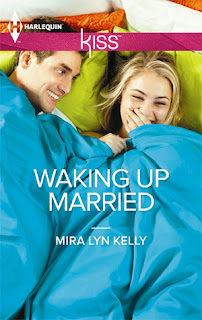 Published December 2012 by Harlequin KISS
About the Book: (from Goodreads)

Her first thought: "Who are you?"

It's the morning after her cousin's bachelorette party in Vegas and Megan Scott wakes up with the mother of all hangovers. Even worse, she's in a stranger's penthouse having woken up with something else as well - a funny, arrogant, sexy...husband!

Up until now, finding even a boyfriend had seemed impossible - been there, got the broken heart, sworn off men for good. Then a few martinis with Carter...no, Connor Reed and she's gone from first meet to marriage in one night!

This is a romance, a classic romantic comedy situation, and an easy read, but the dialogue crackles, the writing sparkles, and the whole book made me smile.

I wasn't expecting much from it, as it was a Free ebook from Amazon, offered on BookBub, and I've been burned several times this month with books I couldn't even make myself finish. Life is too short.

Some readers may find this story... well... let's quote a few (negative) reviews... "cheesy," "corny," "overly predictable," "sterotyped"...  But I agree more with the reviewer who wrote "there are times when a girl needs to be reminded that it's okay to dream and have fantasies, no matter how far-fetched they are. This is probably the mother of all cheesy and corny lines ever, but whatever."

Megan is not looking for a husband, or even for love. She has a job, a life, and her own money. She doesn't need a man to save her or complete her. On a trip to Vegas for her cousin's wedding she gets a little too drunk, ends up being pushed into a date by her so-called friends and wakes up married, as the title implies, to the perfect man - hunky, adorable, rich and thoughtful. He's totally a nice guy, and she's a nice girl, and how did a Vegas wedding happen to two logical, respectably normal people?

Connor is not perfect, or the story would not have any zing to it. And the situation starts to get complicated pretty quickly, because Megan doesn't remember most of the night or the flawed logic he used to convinced her to marry him in the first place.

It's a fun, fast read if you like contemporary romance with a touch of sarcasm and comedy. And as I sit here typing this (on Thursday), I see it's still available for free on Amazon HERE.

Before you leave, take a minute to check out my HALLOWEEN TRICK-OR-TREAT BLOG HOP coming up October 30-31. The "rules" and sign up LinkyLink are HERE, and everyone is welcome, authors and readers alike! Sign up today, and don't forget to grab the badge up in the left corner of this page!

Now I'm off to see what other books have been read and recommended for October in this bloghop! Thanks to the Armchair Squid for not only organizing this hop, but for stopping by earlier this month to invite me to join! It was so much fun, I'll have to sign up for November, too!