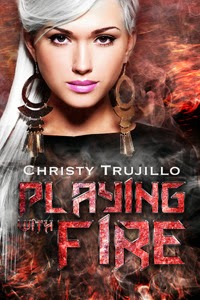 "We are the Annunaki, but you know us as dragon."

Playing With Fire blends history with fiction, creating an epic tale through one family’s path to forgiveness and one race’s desire to choose unity over extinction.

Adopted by Dominic, the head of the North American DragonKind Council, Lea Conti is told on her eighteenth birthday that she will take his place once he resigns. Even though she's the first Dragon in a thousand years who can control her fire, she's not ready for the responsibility such a title would bring and her life spirals out of control. She goes against direct orders, lies to everyone who has ever cared about her and does the unthinkable by falling in love with a human.

To be the dragon the world needs she’ll have to get it together and figure out who the hell she is before it's too late. Stuck between two worlds, she will make her choice, but fate doesn’t always allow us to have the final say. In fact, sometimes fate doesn’t listen to what we have to say at all.

In this New Adult paranormal tale, we are introduced to a race of creatures called Annunaki. Trujillo creates an intricate storyline and history, as well as a fast-paced adventure that draws you in and makes you believe in this magical race of beings, who may look human but are actually dragons.

Lea is nineteen, full of teen angst and some sort of burden that weighs heavily on her mind.The story is told in first person POV that breaks the fourth wall with the narrator making asides about her commentary in the way Sookie Stackhouse talks to the reader in the Charlaine Harris’s southern vampire series. I personally enjoyed every bit of her snarky voice. The story circles around, giving us bits and pieces of both Annunaki lore and Lea's history as the novel unfolds not in a logical progression but in fits and starts which is frustrating at times but also adds to the mystery.

This was my first human/Dragon story, and I really enjoyed it quite a bit. I was disappointed in the editing, as there were more than a handful of instances of wrong words (i.e. diapered instead of disappeared), the kind of errors that spellcheck just can't root out. Barreling toward the end, I realized the author didn’t have nearly enough pages to wrap up all the threads… and now I have to wait to find out what happens to our band of heroes. I hate waiting. But I enjoyed my introduction to this world of dragons and look forward to reading more.

Christy Trujillo was born in a small town in Northeast Florida near the Saint Marys River. As an only child, her love for reading was born from necessity and blossomed into a love for the written word that bolstered the completion of her first novel, Emmy's Song.

Trujillo has published six novels including the multi-cultural Maldito Series and an adult romance under the pen name, Lee Ralaine. She currently resides in Jacksonville, FL with her husband, son, two black cats who seem to be very lucky and one tuxedo cat whose morning antics are more reliable than an alarm clock.

Posted by Katie O'Sullivan at 6:18 AM