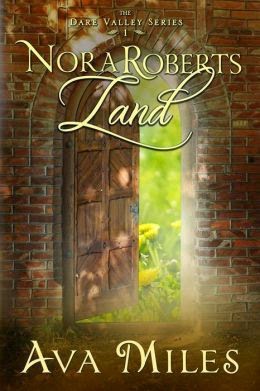 
Journalist Meredith Hale’s ex-husband claimed her Nora Roberts addiction gave her unrealistic expectations about marriage, and she believed him. All dreams of happily ever after—or Nora Roberts Land as her mother calls it—went up in smoke. But when her family asks her to temporarily help their Dare Valley, Colorado newspaper, she decides it’s time to change her life and prove her ex wrong. She’s determined to find her own small-town Nora Roberts hero, prove that true love exists, and publish a story about her quest.

War correspondent Tanner McBride has just returned stateside to work for a major newspaper, and the last thing he expects is blackmail. Yet, before he can even unpack, he’s headed to Colorado. His assignment? Make his boss’s ex-wife fall for him and then break her heart. Her article about discovering love à la Nora might air dirty laundry about her marriage to the media mogul, threatening his senate run. The mogul wants Meredith stopped, and he makes sure Tanner has no choice in the matter.

When the two meet, the sparks between them are undeniable. Meredith, who vowed never to date another journalist, begins to succumb. Could Tanner be her Nora Roberts hero? As they work together to uncover the truth behind a suspicious death, the depth of their feelings unfolds and both realize they’ve kept their secrets for far too long. But before the truth can be revealed, their investigation takes a deadly turn, one that might make Meredith’s personal Nora Roberts Land go up in flames.

Before I get into my review I need to mention something that's kind of an aside, but also an author thing. In this story, the ex-husband plays a significant role throughout. I mention this because when I last queried a story with an ex-husband I was told "romance readers don't go for that sort of thing."
One editor said "exes are like been there done that." So I was curious how this author handled the ex dilemma in a way that would suck in those skeptical readers.

Ava Miles did just that by giving the ex an even Bigger role, as the main antagonist of both the heroine (his ex) and the hero, whom he blackmails.  I guess the moral of the story is, if you're going to have the ex in the story make sure it's a big hate-able role, not just for the ex but for all of us. The author also had the ex make fun of Nora Roberts, disparaging her books as trash and unrealistic, unforgiveable sins in the land of happy endings. So I guess, the answer is Go Big or Go Home. (That seems to be an answer in a lot of my life these days.)

Now on to my review.


Journalist Meredith Hale just survived a nasty divorce, squeezing a decent settlement from her cheating ex. He has political aspirations, and she has potentially career ending dirt on him. With pictures. Money is good, but she'd prefer to have her self esteem back and intact. He actually told her he had to cheat because she drove him to it. I mean, ugh. He blamed her love of romance novels for the failure of the marriage, saying they set unrealistic expectations for love and HEAs

The author paints a nasty portrait of a slimy ex-husband, and at first I thought the heroine, Meredith, might be a little too broken and self-pitying for my  taste. When she agrees to move home for a few months to help with the family newspaper business, some of her backbone returns, glimmers of the woman she was and will be again shine through, getting the reader to root for her. She's determined to prove her ex wrong by finding true love, just like in a Nora Roberts novel.

Tanner McBride is a hard nosed war reporter, who's seen enough loss of life to last him awhile. He thinks he's landed his dream job stateside, but at the interview he finds out the guy will blackmail him with dirt on his younger brother unless Tanner helps ruin a story the guy's ex-wife is writing, something about life being like a romance novel. His mission is to make her fall in love with him before breaking her heart and crushing her story.

Tanner moves out to Dare Valley, Colorado to find Meredith, but she's nothing like what he expected, and neither is the small friendly town. Will he be able to go through with the deal he struck or will he really fall in love? Another mystery is thrown into the plot mix as Meredith and Tanner team up to investigate some bad drug dealers, putting lives and loves in jeopardy.

This was a well written, absorbing tale that kept me intrigued. I admit that the "mysterious" happenings weren't hard to figure out, but that wasn't the real point. The characters were so nicely written, and their arcs fully satisfying. All the references to various Nora Roberts novels and characters were hysterical, both the conversations between Meredith and her sister and the inner neurotic monologues Meredith carried on with her alter-ego, Divorcee Woman. Fun to read, glad it's a series, and might have to find the next one soon.

P.S. At the time I wrote this review, the Kindle version was still on sale for free. Grab a copy today!